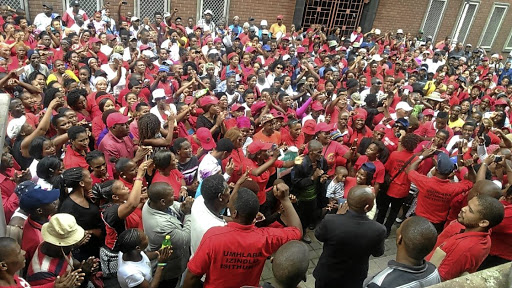 Shack dweller's movement Abahlali baseMjondolo chalked up a victory against the eThekwini Municipality when the Durban High Court ordered on Monday that informal dwellers evicted from a "transit camp" outside the city‚ be allowed to return to their homes.

"On Friday‚ beginning at around 10am‚ the notorious security management unit illegally‚ brutally and violently evicted more than 40 families in the Barcelona 2 'transit camp'‚ in Lamontville. The eviction was carried out until 1am in the morning on Saturday. A number of people were wounded during the attack‚" said Abahlali in a statement.

"This morning Abahlali baseMjondolo went to court in defence of our members. We defeated the eThekwini Municipality in court.

Squatters square off with municipality over evictions

Shack dwellers’ movement Abahlali baseMjondolo approached the Durban High Court on Monday to stop the eThekwini municipality from carrying out ...
News
3 years ago

Families who have been living in tents in Wembley Sports Stadium for about a year were promised by the City of Johannesburg that they will be moved ...
News
3 years ago

About 30 families were evicted from Steenvilla in Steenberg‚ in Cape Town’s south peninsula on Wednesday‚ as police with security dogs watched.
News
3 years ago