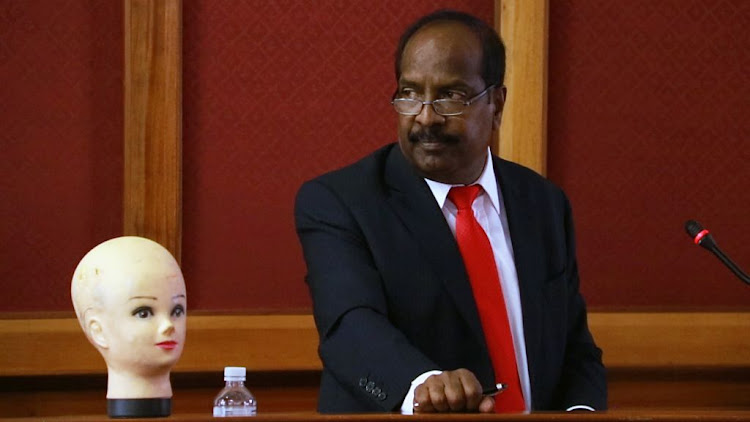 Dr Reggie Perumal appeared in the stand at the Cape Town High Court as the defense’s forensic pathologist during the murder case of Susan Rohde.
Image: Anthony Molyneaux/TimesLIVE

The expertise of one of murder accused property mogul Jason Rohde’s defence witnesses has been questioned.

Forensic pathologist Dr Reggie Perumal – who was also hired by paralympian Oscar Pistorius during his murder trial - was cross-examined by the prosecution in Rohde’s trial in the High Court in Cape Town on Tuesday.

Perumal‚ who testified on numerous issues‚ including the alcohol content in Rohde’s wife Susan’s body‚ admitted he is not a medical microbiologist.

Prosecutor Louis Van Niekerk asked Perumal if he was aware of any instance in which a court rejected his opinion. Perumal could not think of any‚ but Van Niekerk produced a judgment delivered by the High Court in Durban in 2016‚ which dismissed Perumal’s evidence as speculative.

Dauth‚ who received a R9‚000 fine suspended for five years‚ claimed the method used by the nursing sister who drew his blood was flawed.

He said it excluded the possibility of contamination of the blood sample taken; and that the blood sample was stored under circumstances that would not prevent fermentation and “the subsequent production of alcohol by micro-organisms”‚ among other things.

Dauth “placed the accuracy and reliability of the entire chromatographs blood sample measurement process and the calibration of the gas chromatograph in issue”‚ said the judgment.

“Dr Perumal confirmed that he is not a medical microbiologist. He is not registered as a microbiologist with the [Health Professions Council of South Africa].

“Under cross-examination‚ he conceded that he is not an expert in the field of microbiology‚ but that he merely based his experience in dealing with drunken-driving suspects when he was a district surgeon between 1983 and 1994. In short‚ his evidence on the expiry of the blood kit was based largely on speculation. He also seemed to be relying on instructions by [Dauth]‚ yet he is not a legal representative of any sort.”

The conviction was upheld. Asked about the court’s findings on Tuesday‚ Perumal maintained his stance on Dauth’s case. “It’s correct. I did not talk at all on the technical side of the analysis‚” said Perumal. “I used the information that was before the court.”

The prosecution is convinced Rohde‚ former CEO of Lew Geffen/Sotheby’s International Realty‚ killed his wife at a company conference at Spier‚ near Stellenbosch‚ in July 2016. She was found dead with the cord of a hair iron around her neck behind a locked bathroom door.

The post-mortem examinations have taken centre stage in the trial. Based on its post-mortem report‚ the state alleges Rohde beat Susan up and dealt debilitating blows to her left chest‚ causing several rib fractures‚ before smothering her with a pillow and faking her suicidal hanging.

Susan insisted on attending the event as she was suspicious of Rohde after finding out five months earlier that he was having an affair with Cape Town estate agent Jolene Alerskye.

Rohde’s counsel‚ Graham van der Spuy‚ handed in a formal objection on Tuesday to the judge’s decision‚ arguing it was “irregular and not according to the law”.

The Jason Rohde murder trial was abruptly adjourned on Tuesday after his counsel complained it had been “contaminated”.
News
3 years ago

Jason Rohde smothered his wife with a pillow “to shut her up”‚ says state prosecutor Louis van Niekerk.
News
3 years ago