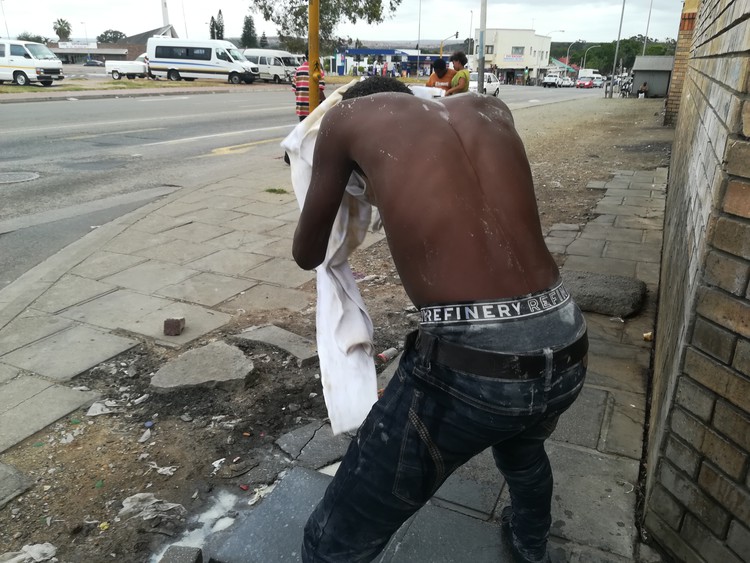 A 15-year-old member of an izikhothane group washes off baking powder thrown by a rival group.
Image: Thamsanqa Mbovane

Ward councillors‚ residents and the police in KwaNobuhle‚ Uitenhage‚ have taken action against the cult of flashy spending by izikhothane which costs their parents enormous amounts of money.

A task team was launched earlier this year by SAPS‚ metro police‚ the community policing form‚ church officials‚ teachers and ward councillors‚ to take action against the trend‚ which involves young people who buy goods such as whisky and clothes‚ spit whisky at each other‚ pour baking powder on each other‚ and even burn clothes or banknotes.

Some of the groups have names such as Smarttenders‚ Ugly Kids‚ Top Spenders.

The groups used to meet at the weekend on Mabandla Road in KwaNobuhle. Members of the task team say the situation has returned to normal. But some of the young people say they have just moved to new venues.

Fifteen-year-old Aviwe (name changed) who is in Grade nine at Nkululeko Secondary School in KwaNobuhle‚ said the izikhothane had been chased away from Mabandla Road by the task team every weekend.

“Our audience was getting smaller every weekend‚ because the police would come and threaten us. We are now doing it in parks far away from houses. We have people who often want to cheer us and we can’t let them down by quitting.”

He said he liked wearing expensive clothes. “My mom supports me by buying trousers that start from R700‚ shoes which are always Carvela that cost from R1‚500‚ while my Uzzi jersey is R900 upwards‚” he said.

“I love being isikhothana. It makes me feel like a celebrity.”

“We no longer burn clothes or money - we tear them! This is because when we kindle fire in public the flames attract the authorities and people who see fire at gatherings often report us to the police.”

Ward 50 councillor Lunga Nombexeza (ANC) said the trend was “satanic” and the team wanted to “wipe it off” the streets.

Another task team member‚ ward 44 councillor Nomsa Booi (ANC)‚ said the township was quiet again on Saturdays. “The trend declined every weekend because the children knew we didn’t approve of this hobby. It was madness.”

“My own child was once an isikhothana but I beat him hard until he stopped it.”

She said attention would now be on soccer‚ netball and other sports and she would urge all councillors of Kwanobuhle to fund sport. “We will fund the activities to let children enjoy the games than wasting time torching money.”

CPF official Monica Mbatsha said awareness campaigns had been launched in schools and meetings had been held with parents warning them about the dangers of the trend. She said izikhothane caused a disturbance to other residents at night‚ and children under 18 drank alcohol.

Eastern Cape Provincial Department of education spokesman‚ Malibongwe Mtima said izikhothane was not a problem in schools‚ since the learners wore uniforms.

- This article was published by GroundUp