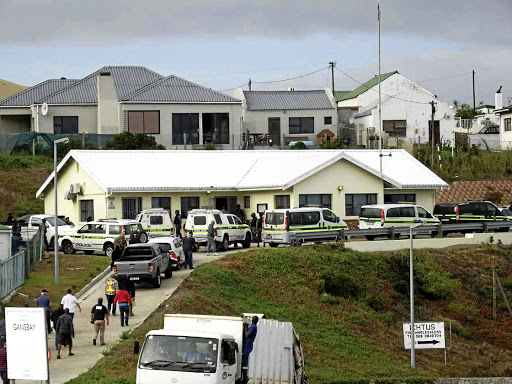 Police and Hawks vehicles at the Department of Agriculture, Forestry and Fisheries building in Gansbaai.
Image: Supplied

Government officials alleged to have used their positions to run one of the biggest abalone poaching syndicates in the Western Cape are back in their jobs.

This comes less than a week after eight of the nine Department of Agriculture Forestry and Fisheries officials arrested in an undercover operation in February were each released on R20‚000 bail by the Cape Town Regional Court.

Beverley Schäfer‚ chairwoman of the Western Cape legislature economic opportunities committee‚ was shocked that the officials were allowed back in their posts.

“Just this morning I received news that ... Daff officials who were arrested in the Overstrand region in March on charges of racketeering‚ corruption and defeating the ends of justice‚ are back in uniform and on duty after having been granted bail just last week‚” she said.

“If the Daff truly cared about the protection of our province’s coastlines‚ it would have immediately suspended these officials and investigated the matter further. What the department is essentially saying is that it condones the involvement of its own officials in the illegal abalone trade.”

The officials were released on bail despite recorded telephone conversations between some of them allegedly showing intent to acquire firearms to kill another suspect and Daff officials.

The state’s bail evidence included 122 pages of transcribed phone calls in which the officials allegedly discussed everything from their involvement in corruption to stealing abalone from other poachers.

The state argues that the individuals turned the Daff office in Gansbaai‚ which is responsible for stopping gangs of armed abalone poachers from raiding the coastline‚ into a criminal entity.

Daff deputy director-general for fisheries Siphokazi Ndundane told TimesLIVE on Wednesday the individuals were supposed to be suspended shortly after their arrest in February.

She claimed corruption in the department was to blame for them being allowed back at work.

Abalone worth R5-million was discovered in a Toyota Verso that was abandoned after a high-speed chase through the town of Gordon’s Bay in the Western ...
News
4 years ago

“They can’t be back at work. There was supposed to be a sign-off that those officials are not allowed to be back at work‚” she said‚ adding that after they were arrested she personally signed letters of suspension.

“There is no oversight here. I’m telling you this was orchestrated‚” she said.

Ndudane is working from her home after she was suspended‚ with several other officials‚ by Daff director-general Mike Mlengana on Thursday for her alleged involvement in corruption.

On Tuesday‚ however‚ Daff minister Senzeni Zokwana “stripped” Mlengana of his authority‚ apparently in response to this‚ and reversed the officials’ suspensions.

The series of suspensions form part of a larger war within the department over the country’s R1-trillion fishing industry which has pitted Zokwana and Ndudane against Mlengana.

They have both also brought in allies‚ with Mlengana being backed by the National Education‚ Health and Allied Workers' Union‚ and the uMkhonto We Sizwe Veterans Association throwing its weight behind the minister.

Both sides have alleged corruption by the other and they have both accused each other of colluding with Chinese fishing stakeholders‚ the criminal underworld and corrupt law enforcement officials.

Ndudane said although her suspension had been lifted‚ she could not enter her office because the locks had been changed.