‘How Gauteng Health Department was plundered’ 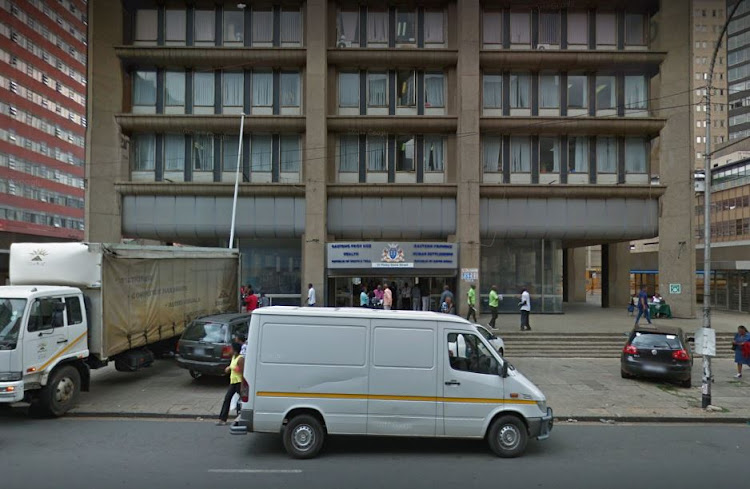 Corrupt expenditure and fraud totalling R1.2-billion was uncovered within the Gauteng Health Department by the Special Investigating Unit (SIU)‚ according to a report made public on Thursday.

The report details how the department was “captured” by senior officials and private companies in 2008 and 2009.

NGO Section27 accessed the report through a Promotion of Access to Information request. The final report was given to former president Jacob Zuma in 2017 by the SIU‚ but only released to the NGO last month by President Cyril Ramaphosa’s administration.

The report shows how senior officials in the Gauteng Department of Health and a former MEC were investigated for defrauding the department.

The Gauteng Health Department is currently in debt of more than R6-billion‚ it emerged during the Esidimeni hearings. The SIU report explains how some money went missing.

The alleged culprits are named in the report‚ but their identities are withheld in this article for legal reasons.

Corruption Watch said in a statement the SIU investigation spanned 2006-2010 and was authorised by a presidential proclamation issued in 2010. Yet its report was only handed to Zuma in March 2017.

“We find it frustrating that it took the SIU seven years to complete this investigation‚” said David Lewis‚ executive director of Corruption Watch.

“This has abetted the extraordinary impunity enjoyed by major alleged perpetrators‚” he said‚ noting that one of the people fingered continues to occupy high political office.

Central to this “capture” by top provincial leaders was a company that was allegedly irregularly hired to work out how to best spend the Gauteng health budget from 2008 and 2009‚ according to the report. The SIU report found they didn’t actually do the work determining how to allocate the budget - the Gauteng department officials did.

The company made money by charging the Department of Health inflated prices for goods. One instance involved a contract to host a Department of Health conference. A proper tender process found a company could administer the conference for R300‚000. Instead the contract was given to a consulting firm‚ which sub-contracted it to an events company and charged R1.6-million.

According to the report‚ the SIU investigation also discovered that the company:

Government officials alleged to have used their positions to run one of the biggest abalone poaching syndicates in the Western Cape are back in their ...
News
2 years ago

The consultancy firm went bankrupt when it lost the department work.

The SIU suggested criminal prosecutions against those involved in the alleged corruption and irregular expenditure.

Lewis said: “The financial misconduct is essentially rooted in the procurement of goods and services by the department‚ much of which benefited particular private sector entities and the public sector officials who colluded with them... The malfeasant conduct documented in the report implicates... former senior officials in the department‚ some of whom were lightly penalised following disciplinary enquiries‚ others of whom were simply permitted to resign without the imposition of any sanction whatsoever.”

Section27‚ Corruption Watch and the Treatment Action Campaign (TAC) said they were determined that the culprits be brought to book.

The NGOs this week wrote to the South Gauteng Director of Public Prosecutions‚ to which criminal matters from the SIU report were referred for further investigation‚ copying the Anti-Corruption Task Team and the Asset Forfeiture Unit (AFU). A separate letter was also sent to the AFU. 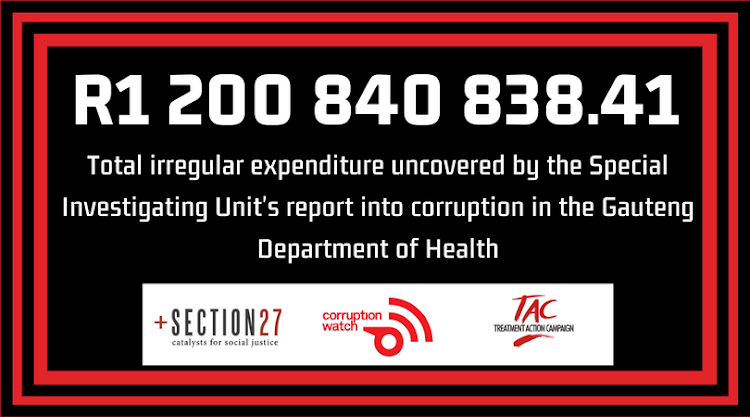 The conduct of the private business people has also been referred to the criminal justice authorities.

Lewis commented: “This is a textbook example of state capture in practice. Perhaps the most egregious conduct reported was the secondment of 20 [staff members from the consulting committee] to key decision-making roles within the Gauteng Department of Health‚ including the appointment of one of the secondees [as a senior financial officer]. His duties included approval of payments to (the consulting firm) and serving as a voting member of the departmental acquisition council.”

Anele Yawa‚ the general secretary of TAC‚ said there was a direct connection between the current devastating financial crisis in the Gauteng health department and rampant corruption‚ which had started during the period investigated by the SIU.

“The Gauteng health system is in crisis. Patients’ needs are growing yet critical posts are being frozen; community health workers are unpaid; billions of rands are owed to critical institutions like the National Health Laboratory Service and SA National Blood Service‚ threatening their viability. And despite all this‚ several implicated officials remain in high office. This sends the message that crime does pay.”

In addition to contacting law enforcement agencies‚ the organisations said they would actively engage the Gauteng government and the Presidency to ensure implementation of the policy recommendations contained in the SIU report.

And apart from action being taken against the political and administration officials‚ the NGOs said: “It is also imperative that the private sector companies and individuals at the heart of the state capture of the Gauteng Department of Health are prevented from doing any further business with the state‚ at any level.”

The SA Medical Association (Sama) says the National Health Insurance (NHI) bill to be released by Health Minister Aaron Motsoaledi on Thursday must ...
News
2 years ago

South Africa's department of health on Monday became the first one in the world to announce rolling out a new and much more tolerable drug to fight ...
News
2 years ago
Next Article