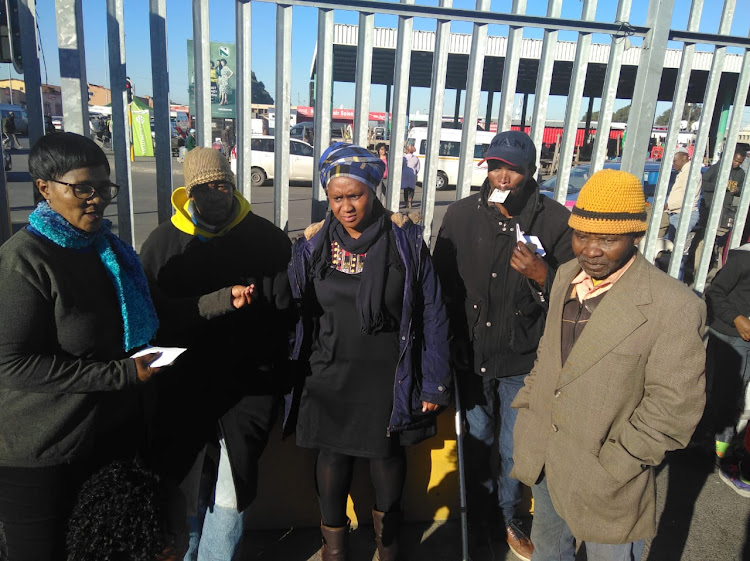 Mfanelo Hlalukana prefers to walk aimlessly up and down the streets of Nyanga than listen to the cries of his starving grandchildren.

The 71-year-old is one of many social grant recipients in the impoverished Cape Town township who have been unable to access their money because of South African Social Security Agency card glitches.

Adding to Hlalukana’s worries is the money he borrowed from a loan shark‚ which is accumulating interest‚ and the grandchildren he is unable to feed.

He was at Sassa’s Zolani Centre office early on Wednesday to join queues that were already snaking around the building — and left empty-handed. “I could not get my money‚ I was told that it does not reflect on the card‚” he said.

“I cannot buy food‚ my cupboards are empty. My grandchildren are starving but there is nothing I can do. I would rather roam around than look at their tears. I am at my wits’ end.”

His neighbour‚ Mazwi Ngwane‚ 55‚ had a similar experience. “I went to the post office twice since Monday‚” he said. “They told me my pin is wrong but I have been using it for a while.

Nomsa Mfusi broke into tears while explaining the trauma she faced after not receiving her social grants on time.
News
3 years ago

Ngwane said officials had told him to go an ATM on Thursday and check if the card works‚ but in the meantime his debts are escalating as he has to borrow to buy food.

Equally distraught was Babalwa Ndabekelana. She lost her Sassa card in May but the department is yet to pay her the money for that month.

“I enquired here today and I was told that it has been issued‚ but it has yet to be paid to me‚” said Ndabekelana. “I was unable to buy my children winter clothes. I am told to keep checking whether I have been paid at the ATM but the ATM has charges. This is insane.”

I cannot buy food‚ my cupboards are empty.

Sassa employees went on strike last month to highlight their concerns about the new grant payments system. The DA spokeswoman on social development‚ MP Bridget Masango‚ visited the Zolani Centre on Wednesday and said she was troubled by the fact that grant recipients had been left high and dry despite promises that their old cards would work until September 30.

“Clearly‚ neither Sassa nor the Post Office have been adequately prepared for the switch to the new system. Any delays in beneficiaries accessing their grants could have catastrophic consequences for the survival of poor families who rely on grants just to get by‚” she said.

Masango traced the problem back to “the time of former Minister of Social Development Bathabile ‘Dodging’ Dlamini. It was due to her lack of leadership that Sassa stumbled from one crisis to the next.”