Nelson Mandela fought to get out of prison... but you could pay R3.4-million to sleep in his cell 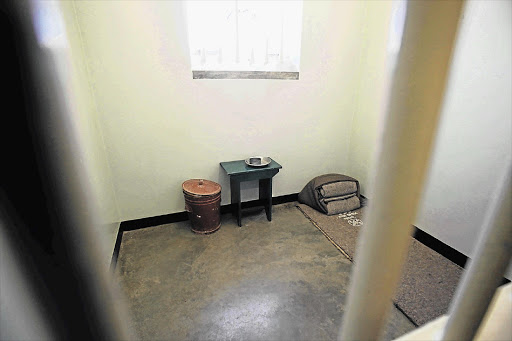 How much would you pay to spend a night in the Robben Island cell that the late former president Nelson Mandela spent 18 years locked in?

Well‚ The CEO Sleepout group is hoping to get local and international business people as well as celebrities to bid for the experience. Bidding will start at $250‚000 - which is roughly R3.4-million.

"No auction of its kind has ever been done in South Africa. The highest bidder will win the honour of spending the night inside the historic cell number 7‚ where Mandela spent 18 years‚" the group said on its website.

The tiny cell has nothing more than a small red bin‚ a green bench‚ a metal bowl and cup‚ a small mat and thick metal bars on the small window.

The bid will close on midnight on July 17‚ and the unprecedented sleep-in at the prison will happen on July 18‚ the day which would have been Mandela's 100th birthday.

"A portion of the funds raised from this auction will be awarded to The Prison-To-College Pipeline (P2CP)‚ an innovative education programme that was started in New York. P2CP provides prisoners with access to public university-level education‚ mentorship‚ and community support to increase their chances of timely graduation and employment upon release and being replicated in South Africa‚” the group said.

The late struggle stalwart had dedicated 67 years of his life to the fight against apartheid – with 18 of his 27 years in prison spent at Robben Island.

In acknowledgement of the 67 years‚ the organisers are hoping to get 66 other people to come and spend a night on the island along with the successful bidder. But that‚ too‚ will come at a hefty price: $100‚000‚ which is almost R1.4-million.

This visit to the island is part of the Nelson Mandela Legacy projects which are happening to commemorate what would have been his centenary. Another sleep over will be happening at Lilliesleaf in Rivonia. The group has called for at least 12 people to take part in this excursion‚ which will cost R2‚000 per person.

The location had been key for the struggle stalwarts who were tried in what became known as the Rivonia trial. They had used Lilliesleaf as a meeting place and a hide-out for senior ANC and SACP leaders in 1960.

'The Long March To Freedom', an ambitious sculpture installation at Tshwane's National Heritage Monument, aims to redress 'the lack of representation ...
Lifestyle
2 years ago

You will soon find former president Nelson Mandela at your closest cashier as new coins and banknotes commemorating his 100th birthday go into ...
News
2 years ago

A meeting at the Cape Town Fish Market restaurant culminated in boat operators inflating their prices for trips to Robben Island. Now they’ve been ...
News
2 years ago