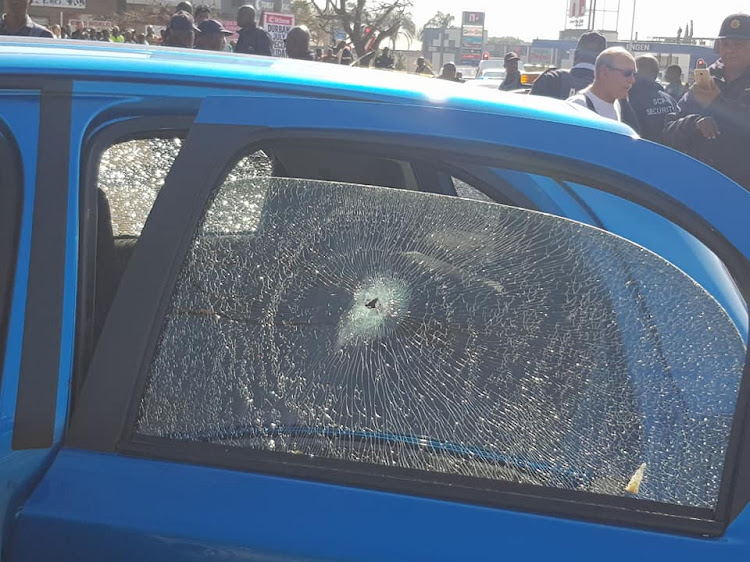 One of the vehicles struck as hijackers clashed with private security in Northcliff, Johannesburg, on Thursday afternoon.
Image: Suburban Control Centre via Facebook

Residents and motorists in Northcliff‚ Johannesburg‚ scrambled for their lives on Thursday as would-be robbers and private security engaged in a midday shootout.

In a video of the incident‚ more than a dozen shots can be heard as the person who filmed the three minute clip ducks for cover inside a vehicle. Later‚ pictures would emerge at least one vehicle with a shattered window as a bullet pierced through it.

Private security company Suburban Control Centre‚ which was at scene of the incident and whose officers were involved in the shootout‚ said in a Facebook post that one of their officers "drove into a driveway robbery in Montgomery Park".

"A chase ensued between the three suspects and their silver Mercedes-Benz. After the suspects crashed the Mercedes on the corner of Beyers Naude and Milner Avenue‚ they ran across to the Engen garage and hijacked a young lady driving a blue Toyota Etios‚" the post continued.

When the company's officers cornered the hijackers‚ "they started shooting whilst fleeing the scene".

"One of our reaction officers returned fire and shot one of the suspects (the driver) dead. “The other two exited the hijacked vehicle‚ where one entered into a taxi pointed [at] the driver with a firearm and fled towards Melville. The other suspect fled on foot into a nearby area. The deceased suspect’s firearm has also been recovered in the car‚" the post said.

Witnesses of the events posted on the I Love Northcliff Facebook page.

"I was at the robot when the shooting started but I don't actually know what happened… [I] just drove outta there as fast as I could‚" one person said.

Another commented: "I was at the corner‚ turned around as soon as I heard the shots. Scary as hell."

After hijacking victim Louise Schachat was flung from her car into a ditch‚ she could only watch as her attacker drove away with her dogs‚ Khaya and ...
News
2 years ago

Third suspect still on the run in fatal Chatsworth hijacking

A man thought to have links to the murder of nine-year-old Sadia Sukhraj is proving to be elusive‚ with police unable to track their prime suspect a ...
News
2 years ago

A 32-year-old man was seriously wounded in an alleged attempted hijacking in Centurion‚ south of Pretoria‚ on Friday night‚ paramedics said.
News
2 years ago

An ANC member of parliament has been shot dead in Johannesburg.
Politics
2 years ago
Next Article