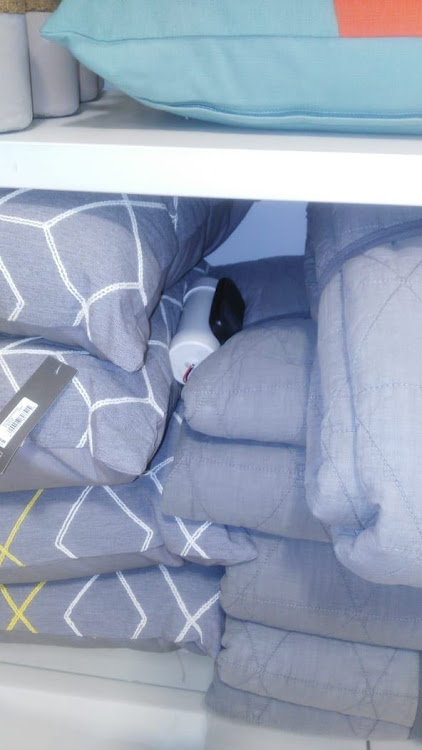 What is believed to be an incendiary device planted at Woolworths in Gateway. The discovery prompted the evacuation of the store for the second time this week.
Image: Supplied

An “incendiary device” found hidden in the Woolworths store in the Gateway mall - the second in as many days - forced a complete evacuation of the shop on Saturday.

The discovery of what appears to be an explosive device - a cell phone attached to a short length of white PVC pipe hidden between cushion on sale in the store.

This follows the implementation of “additional precautionary measures” after the same store and another in Durban were firebombed on Thursday.

Police spokesman Lieutenant-Colonel Thulani Zwane said that the Explosives Unit had been deployed to the scene and had safely removed the device.

A case of contravening the explosives act had been registered‚ Zwane said.

The device at the Gateway store‚ understood to have been fashioned from a cell phone and propellant‚ had been planted in the pocket of a jacket on a clothing rack.

The device was then triggered‚ causing a fire which was extinguished by internal sprinkler systems.

Woolworths spokeswoman Kirsten Hewett confirmed that a device had been found and the store evacuated.

“Authorities were called in to investigate and assist with the matter‚” she said.

“We can assure the public that we take these incidents in KZN incredibly seriously and we are doing all that we can to ensure the safety of our people and our customers. Due to the sensitivity of the investigation we are unable to divulge the additional protection and detection measures we have put in place in our stores‚” Hewett added.

Retailer Woolworths has put “additional precautionary measures” in place after two stores in Durban were firebombed on Thursday.
News
3 years ago