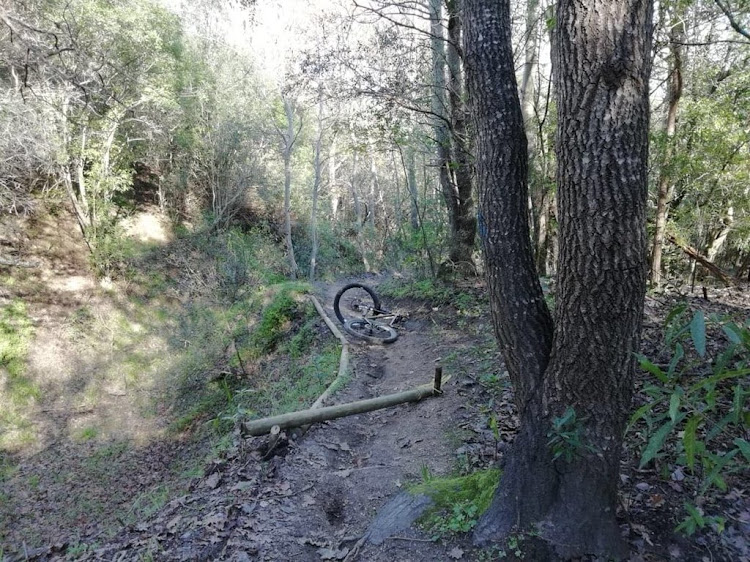 A wire placed across the mountain bike trail at Table Mountain National Park left a cyclist with abrasions on his neck on July 7, 2018.
Image: Twitter/@TableMTB

Cyclists fear that a strand of wire placed at neck height across a trail in the Table Mountain National Park was placed there deliberately to injure riders.

This comes after a cyclist was yanked off his bike and sustained abrasions to his neck when he collided with the wire while cycling down The Glen on Saturday afternoon.

Robert Vogel‚ founder of Table Mountain Bikers‚ said the trail was opened to cyclists in 2016.

He said cyclists had encountered a lot of resistance from other users of the trail‚ including dog walkers.

The association condemned the act in a tweet on Saturday and vowed to expose the “culprit”.

“That’s what some people call trail sharing! A wire at neck height across a legal trail in the Glen. A calculated act to inflict maximum harm! Rider will lay criminal charges and we’ll find the culprit‚” tweeted the association.

Vogel told TimesLIVE on Monday that this was the third time that barriers have been placed on the trail.

There are people who clearly don’t like the cyclists on the trail‚ but this time this one went to the extreme.

“There are people who clearly don’t like the cyclists on the trail‚ but this time this one went to the extreme. We assume it is a local resident‚” he said.

“We have faced this before. I personally found someone doing it. A year ago‚ someone dragged logs and other obstacles onto the trail.”

Vogel said cyclists did not report that incident at the time but instead “dealt with it at the scene”. He said they had hoped that would be the end of the trouble.

“We think it is the same person‚ a local resident - and this time it could have been worse‚” said Vogel of the latest incident.

“We have informed the game rangers. A case will be opened with the cops. I have been in touch with the cyclist‚” he added.

Taking up the challenge thrown down by his son-in-law‚ Arthur Duncan‚ aged 83‚ from Howick‚ successfully completed the 260km Adventure in the ...
News
3 years ago

Another cyclist killed by driver

Veteran mountain bike cyclist and frequent Absa Cape Epic podium finisher Greg Anderson‚ 57‚ has been killed by a car in a hit and run accident near ...
News
4 years ago