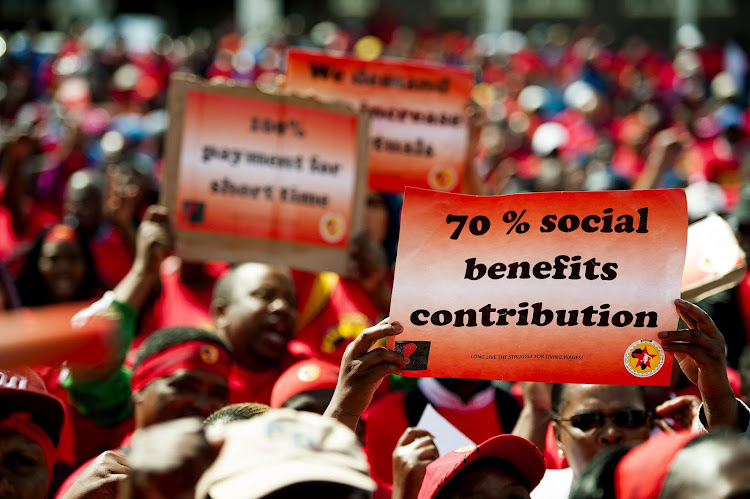 The country experienced its highest increase in labour strikes in 2017‚ with the figure rising by 8%.

This is according to the Industrial Action report released by the Labour Department on Tuesday.

There were 132 work stoppages as a result of strikes in 2017‚ increasing from 122 the previous year.

The department said the hike was the highest ever recorded in the “history of strike monitoring”.

According to the report‚ 125‚000 employees were involved in strikes across all industries‚ costing the economy R251-million in lost earnings in 2017‚ compared to R161-million in 2016.

The annual strike analysis is drawn up from data the department collects from employers and trade unions after strikes and lockouts.

Wage negotiation between Eskom and labour representatives are set to resume on Tuesday as the power utility continues its fight to stave off another ...
News
3 years ago

It measures labour disputes‚ work days lost and work stoppages‚ among other things.

The report showed that close to the entire construction industry workforce‚ at 98.4% participated in industrial action during the reviewed year.

“Unlike in 2016‚ mining‚ the industry with potential for economic growth and labour absorption‚ lost more to wages in 2017 at about R137-million. This was followed by the community‚ manufacturing and transport industries that were also affected‚ with the total wages lost nearly R96-million and 80‚935 workers involved in strikes‚” read the report.

However‚ most of the strikes in 2017 were protected at 52%‚ unlike in 2016 when 59% of the strikes were unprotected‚ meaning workers had to obtain strike certificates permitting the action.

National Union of Metalworkers of South Africa (Numsa) members working at the Gautrain on Friday fought back with “the only weapon they have in their ...
News
3 years ago

Nehawu members accounted for 29% and Samwu 10% of striking employees.

This was also reflected elsewhere in the report‚ with the public sector having lost more working days to industrial action than the private sector.

Both Nehawu and Samwu represent workers in the public sector.