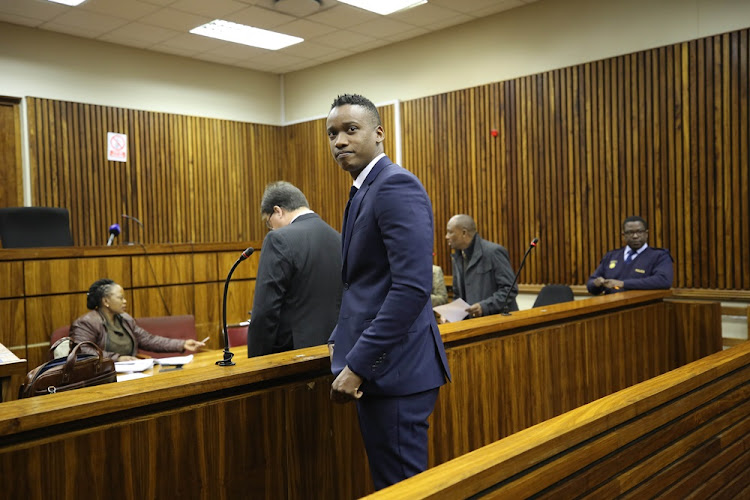 Former president Jacob Zuma arrived at the Randburg Magistrate’s Court in Johannesburg to support his son Duduzane as he faced culpable homicide charges on Thursday morning - but he was five minutes too late.

Scuffles broke out at the Randburg Magistrate’s Court on Thursday July 12 2018 as members of the Black First Land First accosted Afriforum CEO Kallie Kriel, after Duduzane Zuma appeared in court.

BREAKING: former President Zuma has arrived at court to support his son Duduzane. He’s too late for the court appearance. pic.twitter.com/aeNqokKfWS

Edward Zuma‚ Duduzane’s brother‚ confirmed what the defence team told TimesLIVE: their father had come “to show support” for his son.

Several other Zuma family members‚ including one of his sisters‚ were at court to support him.

The Zuma family and friends occupied almost the entire front row of the court’s public gallery‚ and he turned to talk to them before court started.

Several Zuma family members - including one of his sisters - in court for #DuduzaneZuma culpable homicide appearance. Zuma lawyers say they have no objection to media recording of the proceedings. pic.twitter.com/kZiB4V2nR1

While the businessman’s brief court appearance was pedestrian‚ the scenes that played themselves out outside court were not. Black First Land First members became embroiled in a one-sided screaming match with AfriForum CEO Kallie Kriel‚ when he tried to address the media.

Kriel was trying to give an interview to several broadcasters on Afriforum response to #DuduzaneZuma Court appearance. BLF offended that Afriforum said it was taking the case on because they wanted justice for the women killed in DZ crash with a minibus. pic.twitter.com/sDJdsIhBNC

Afriforum had announced in April that it would seek a private prosecution of Duduzane Zuma for culpable homicide‚ prompting the National Prosecuting Authority to reverse its decision not to charge him over a 2014 car crash.

The organisation said it was acting on behalf of crash victim Phumzile Dube’s family‚ who former prosecutor Gerrie Nel said had been treated unfairly by the NPA‚ and wanted justice for the 29-year-old mother.

BLF members repeatedly screamed at Kriel that he was a racist who had no right to get involved in “a matter between two black families”. They also shouted that Kriel was a “settler” who must “go back to Europe”.

The families of the women whose deaths Duduzane has now been charged for – Dube and Jeanette Mashaba – were not in court. They are understood to have informed the NPA that they would not be attending the hearing.

Inside court‚ all attention at Thursday morning’s hearing was focused on the former president’s son‚ who joked and laughed with a number of reporters.

Asked how he felt about not being shackled‚ Duduzane responded to one journalist “I like your jacket”. When SABC reporter Chriselda Lewis asked him how he was feeling as he walked into court‚ he responded with a single word: “hungry”.

His lawyer‚ Advocate Mike Hellens‚ told the court that the defence hoped Duduzane’s culpable homicide case will proceed this year.

Duduzane Zuma is the “victim of a political vendetta” by the “Cyril Ramaphosa administration‚ pressured by Pravin Gordhan‚ white monopoly capital and ...
News
2 years ago

The other separate case against Zuma Junior – which concerns his alleged role in a Gupta family plot to corrupt former deputy finance minister Mcebisi Jonas – has been postponed until January.

The State has agreed to hand over the full record of the inquest that led to Duduzane being charged over the collision between a minibus taxi and his Porsche by his next scheduled appearance‚ August 23.

At the conclusion of the inquest‚ Magistrate Lalitha Chetty found that Duduzane’s negligence had resulted in Dube’s death.

The State has since charged him with culpable homicide not only in connection with Dube’s death‚ but also in relation to the death of Mashaba – an injured passenger who died in hospital‚ weeks after the crash that killed Dube.