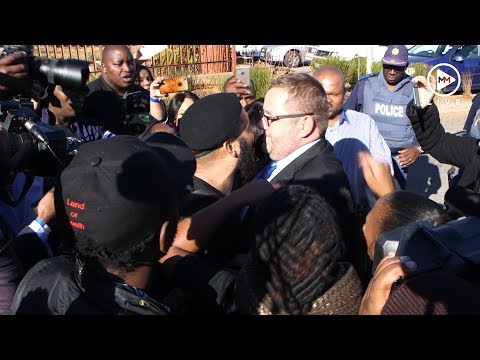 Scuffles broke out at the Randburg Magistrate’s Court on Thursday July 12 2018 as members of the Black First Land First accosted Afriforum CEO Kallie Kriel, after Duduzane Zuma appeared in court.*

Shortly after Zuma’s case was postponed‚ Kriel attempted to address the media but was prevented by BLF activists‚ who shouted: “It’s a matter of black people! No racist is going to speak for our people!”

BLF leader Andile Mngxitama urged the media to report the truth and stop being biased. He also said his movement was under attack because it was defending former president Zuma and radical economic transformation.

“Today we are here to stand in solidarity with Duduzane Zuma‚ who again we know is attacked only because he is a son of Jacob Zuma‚” said Mngxitama.

He vowed that their members would protect themselves at all costs. “Any white person who touches us‚ we are going to defend ourselves‚” he warned.

Inside the courtroom‚ Zuma's case was postponed until August 23. The magistrate said the postponement was to give the defence more time to go through the charges and documentation pertaining to the case‚ which relates to a 2014 car crash that left two women dead.

*Note: The story has been corrected to reflect the fact that the BLF accosted Kallie Kriel.