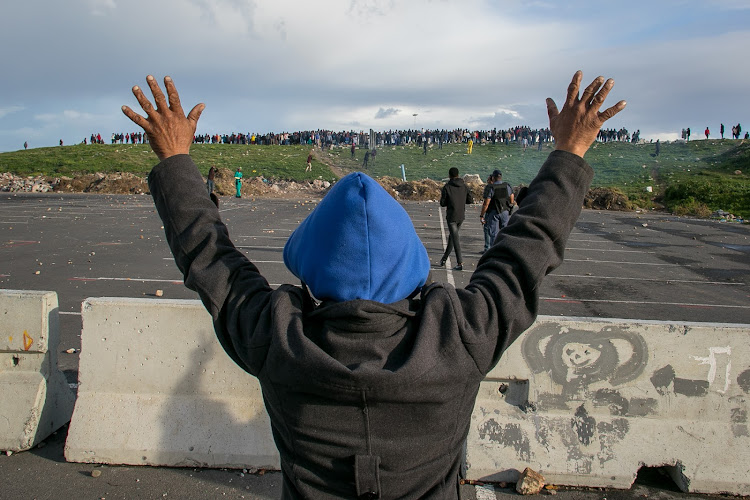 A Hermanus resident holds up his hands in an attempt to stop protesters from throwing rocks at police on July 13, 2018.
Image: Anthony Molyneaux

Police were being bolstered by units from across the Western Cape as violence escalated on Wednesday in the coastal town of Hermanus.

Overstrand cluster commander Brigadier Donovan Heilbron said that despite having reached a “peace agreement”‚ about 3‚000 people had attempted to storm through a police barricade on Wednesday to reach the town centre.

Residents have clashed violently with police who have arrested several alleged protest instigators‚ which in turn has become the focus of the protests that initially revolved around the question of land.

At one point during the clashes‚ protesters assaulted a policeman in riot gear and stole his shotgun before he managed to chase them off‚ firing live rounds with his sidearm.

Police Minister Bheki Cele plans to visit Hermanus on Friday to meet protesters - one of the conditions put forward by protest leaders in order for there to be a peace agreement.

An application for a permit‚ permitting a gathering of 20‚000 people to protest outside the Hermanus Magistrate’s Court has reportedly been rejected.

“The plan is still Minister Cele is coming on Friday. We met on Monday with some of the representatives from Zwelihle. We said to them this is the possible plan‚ we want to make them part of the planning process so that we can allow them the space to engage with the minister. They confirmed to us they will cool down because they also requested in their memorandum that they speak with the minister‚” said Heilbron.

“However‚ this morning‚ between 3‚000 and 5‚000 people assembled in Zwelihle at the taxi rank and tried to force their way into town‚ so there was a huge confrontation between SAPS and the protesters‚” said Heilbron.

He said that the situation was volatile and that there were still skirmishes between public order police and protesters.

He said that they had sufficient personnel and were being bolstered by units from Cape Town.

Residents from the surrounding neighbourhoods claimed that people in Zwelihle were being stopped from going to work by protesters and that intimidation and destruction of property was being used as a weapon against people who wanted to work.

Sandy Herman‚ a resident of the gated community of Lakewood Village‚ was awoken at 3am on Wednesday by a phone call by an employee whose home had been torched.

“When you drive east from Hermanus past the Marina Hotel‚ you’re driving into a total white bubble‚ we are residents of that white bubble. We really don’t know what’s going on half the time‚” he said.

“We were traumatised last night when we got a phone call at 3am …He [the employee] said he couldn’t account for his whereabouts in the afternoon when these guys confronted him‚ so they burnt his house‚ burnt his clothes‚ burnt his furniture‚” he said.

Hope for end to land battle in Hermanus

Protests in Hermanus over housing and land for residents in Zwelihle have been ongoing all week and continued on Friday.
News
4 years ago

Herman said that he went to give clothes and blankets and food to his employee at a police barricade and told him to go with him to make a statement at the police station‚ but he refused saying that his life would be in danger.

“I’m a businessman from Johannesburg and I’m quietly retired here in Hermanus and it’s a white bubble here where I’m living. It is almost beyond understanding‚ and a mile away there are people that are suffering and the police can’t do anything‚” he said.

“Here is an innocent guy with nothing‚ and for no reason other than they couldn’t account for his whereabouts for a couple of hours during the day‚ they burn everything that he owns‚” he said.

“I can’t lie in my warm bed in that closed community where we live in and sleep at night anymore. My conscience says to me you cannot do this while these wrongs are going on around you‚” said Herman.