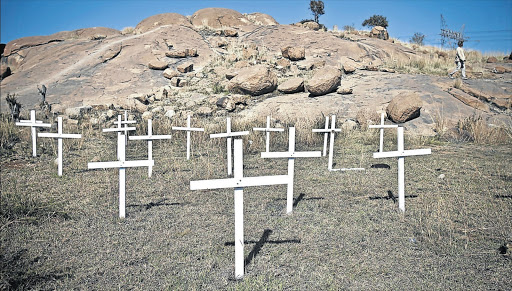 The government has offered families of the slain Marikana mine workers a R100-million settlement for general damages‚ six years after the massacre.

The Socio-Economic Rights Institute‚ which represents 320 claimants who have sued for loss of support and emotional shock‚ said on Thursday it had to consult the families on the offer.

Business Day can reveal that workers who were injured during the massacre and those who were arrested in its aftermath also received settlement proposals a month ago‚ which were rejected.

Forty-four people‚ among them security guards and police officers‚ were killed during the violent protracted strike by Lonmin mine workers in Marikana near Rustenburg in August 2012. The majority of victims were shot dead by the police.

About 250 people were arrested following the massacre‚ while 70 workers were injured. The families filed claims in August 2015 against the minister of police for compensation and a formal apology for the loss of their loved ones.

Seven months after government promised to install mast lights in Marikana informal settlement in Philippi‚ no lights are working.
News
4 years ago

A top cop who spoke out about the police's handling of the Marikana massacre - and described it as defined by incompetence and cover-ups - now stands ...
News
4 years ago

Former North West Deputy Police Commissioner William Mpembe is one of six men facing charges of murder in connection with the 2012 Marikana murders.
News
4 years ago