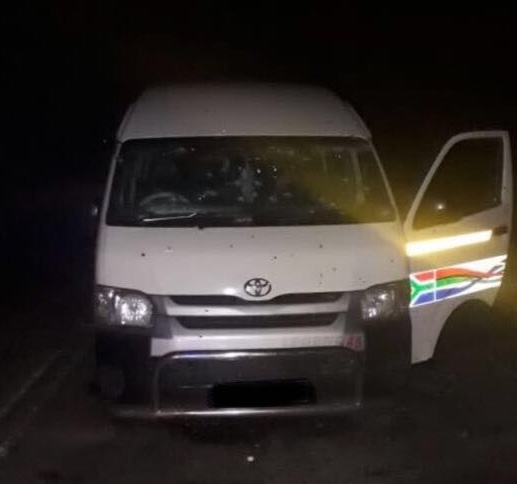 Eleven people were killed when a minibus taxi was set upon with automatic rifles in an ambush in central KZN on 22 July 2018.
Image: SUPPLIED

Eleven people were killed and four others wounded in a night-time massacre on the R74 near Colenso in central KwaZulu-Natal on Saturday.

It is understood that a minibus taxi carrying passengers - all who are linked to the taxi industry - had been waylaid by gunmen who used automatic rifles to pepper the vehicle.

Police spokesman Brigadier Jay Naicker said that the taxi had been ferrying mourners from a funeral in Ematimotolo back to Gauteng when it was ambushed.

“On the R74 road between Colenso and Weenen‚ unknown persons jumped onto the road from the bushes and opened fire at the taxi‚” he said.

“Unconfirmed information for now indicates that passengers are from a taxi association in Gauteng attending the funeral of one of their members‚” Naicker added.

He later confirmed that eleven people had been killed in the mass slaying.

“Detectives from the Provincial Task Team in Durban were dispatched to the scene.”

KZN MEC for Transport‚ Community Safety and Liaison Mxolisi Kaunda is expected to visit the crime scene on Sunday.