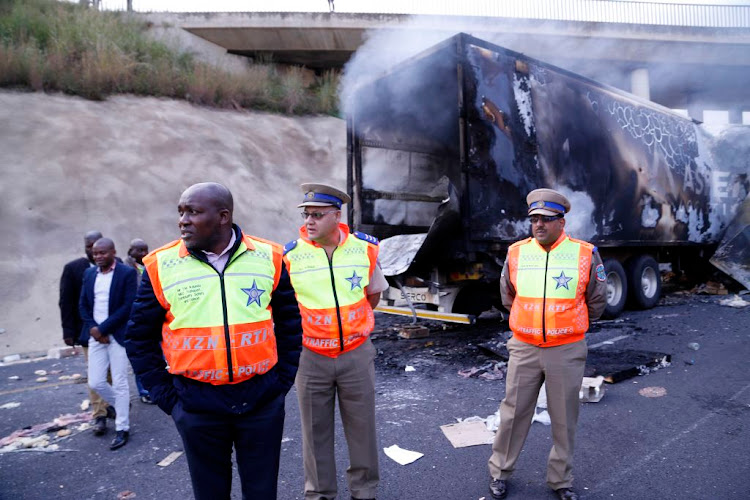 KwaZulu-Natal MEC for Transport‚ Community Safety and Liaison Mxolisi Kaunda said that an overwhelmed police force in the province has responded to 270 violent and illegal protests in four months.

Kaunda was speaking at a meeting of law enforcement agencies convened in Durban to address a groundswell of public protests‚ which “placed people and property in danger”.

“Our province has been engulfed by public protests which have not only been illegal but also violent‚” he said.

“In the past four months 270 illegal protests have been reported in the province. What makes matters worse is that the majority of these protests become violent and result in damage to property‚” he added.

Kaunda touched on the blockading of national freeways‚ specifically the shutdown of the Mooi Toll Plaza on four occasions and the blocking and looting of trucks on the N2 in the north of the province.

“When you block the N2 or the N3 you are not only harming KZN but also harming the country. We want to declare war on these protests‚” he said.

“The anarchy must now come to an end. Any person who blocks the roads or conducts any criminal behaviour will be charged and prosecuted.”

Kaunda said that a committee had been established and was given a three-month window to eradicate illegal protest action.

A meeting between Hermanus protesters and Police Minister Bheki Cele broke up abruptly on Friday after Cele gave the community 72 hours to return a ...
News
4 years ago

Angry shack dwellers in Durban burnt tyres and obstructed traffic after the city’s Land Invasion Unit tore down their homes on Tuesday.
News
4 years ago

An iconic Johannesburg Metrobus double decker was " burnt beyond recognition" by a protesting mob in Eldorado Park‚ south of Johannesburg‚ earlier ...
News
4 years ago