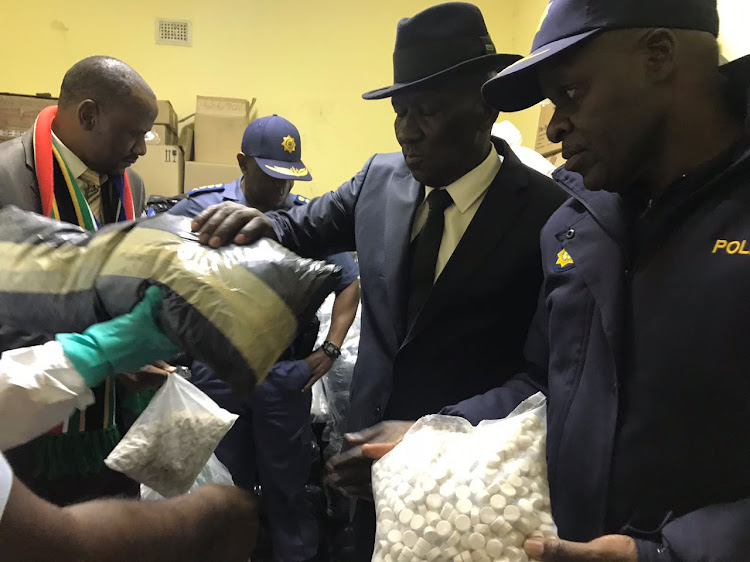 Minister of police Bheki Cele at a drug lab in Harding, KwaZulu-Natal on July 26, 2018, where mandrax and equipment valued at nearly R250-million was seized.
Image: Jeff Wicks

A drug lab nestled in the rural hinterland of Harding in southern KwaZulu-Natal had been disguised as a sheep farm‚ with not a single woolly animal on the entire 10ha plot. Mandrax and lab equipment valued at nearly R250-million was seized there this week.

On Wednesday the Hawks and Crime Intelligence Unit officers raided the farm and arrested two men who had been working on the property.

Cele said police had now trained their sights on the owner of the property‚ who had cultivated a “booming business”.

“We did not find a single sheep there‚” Cele joked‚ saying that the entire farm had been retrofitted to manufacture drugs.

“It was a serious factory which was established on this farm. This is a 10ha property which had housed the facility and tall walls had been built around it‚” he said.

“What is clear to us is that this was a growing business. There are new machines which were seized. The owner of the farm just purchased another property near Howick and we strongly suspect that this farm was to be used for the same purpose‚” he added.

A key seizure as part of the raid was a “dispensary book” detailing consignments which had been delivered from the drug lab.

“We hope that book will help us to tell who has been receiving these drugs but by the look of the size of the facility and the amount of drugs that were seized‚ they were not only destined for local soil‚” he said.

Two people were arrested in a drug bust on Wednesday in KwaZulu-Natal.
News
3 years ago

DJ Godfather and his “bookkeeper” wife say they will plead not guilty to charges of dealing in drugs.
News
3 years ago

A 31-year-old woman in Galeshewe‚ North West‚ has been arrested for dealing in drugs.
News
3 years ago