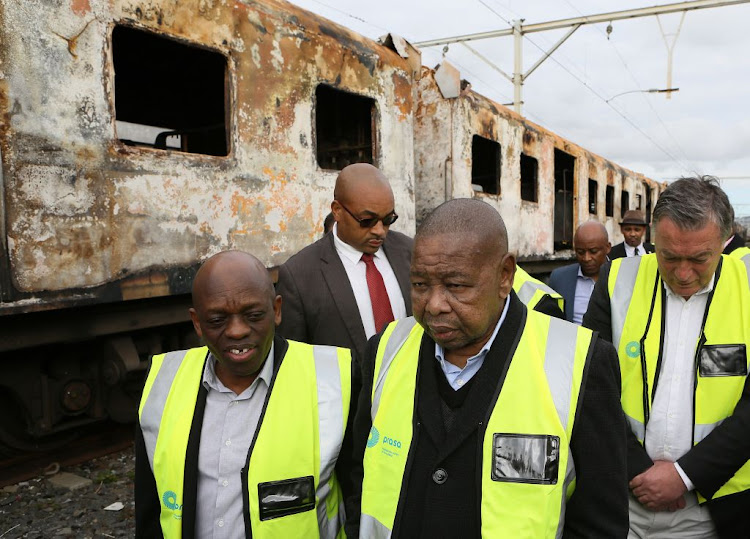 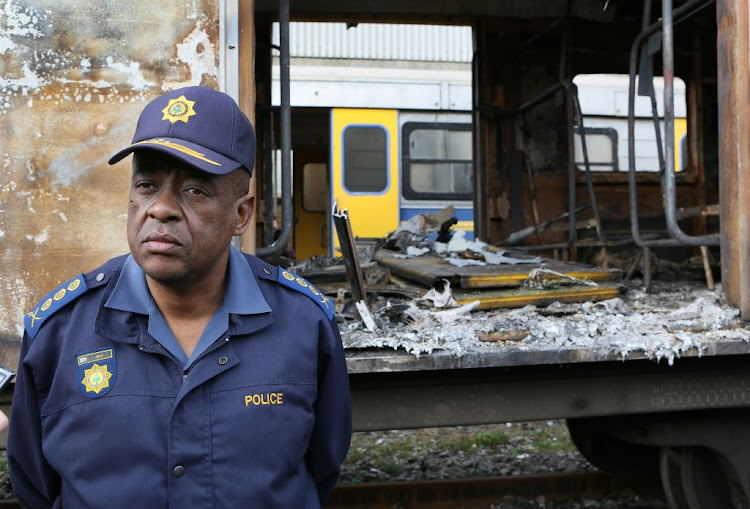 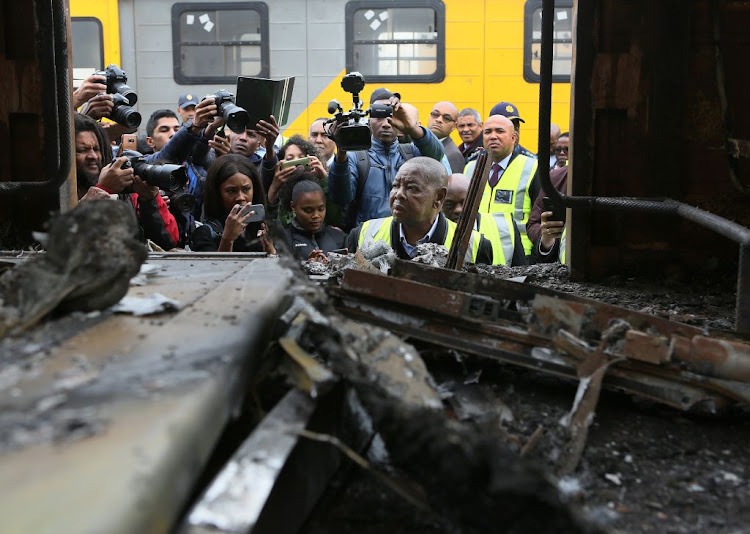 Transport Minister Blade Nzimande says “elements of serious organised crime” are behind some of the arson attacks on trains in Cape Town.

Nzimande was speaking on Friday at Transnet’s Paarden Island depot‚ where he inspected two trains which were destroyed by fire this week.

His visit to the depot with Western Cape police commissioner Lieutenant-General Khombinkosi Jula was surreal‚ however‚ as on their way in they passed people burning cables‚ likely to be from Prasa infrastructure‚ just metres from security guards.

As he spoke to the media in front of the remains of four passenger coaches worth R30-million‚ black smoke from burning cable rose behind him.

Nzimande said police believed there were “multiple motives” behind arson attacks on trains. “There are ordinary criminals who are actually vandalising trains‚ there’s copper theft and all that‚ but also at the same time there are elements of serious organised crime‚” he said.

“We are talking to the police now to establish whether there are any commercial benefits to the people who burn trains.”

The train he stood in front of was torched at Cape Town station on Saturday. Metrorail regional manager Richard Walker said another train set on fire in Retreat on Thursday would cost R21-million to replace.

Metrorail’s operational problems in Cape Town reached their apogee earlier this year when the central line‚ the city’s busiest‚ was closed for several weeks because of the rate at which trains were being destroyed and infrastructure vandalised.

Nzimande said on Friday that a task team set up to find a solution to the vandalism of Metrorail’s infrastructure was expected to report to him by the end of August.

Western Cape transport MEC Donald Grant said the central line was down to eight trains from 33. “The question is‚ who is benefiting from this? It’s not only the burning of the trains that’s the issue‚ it’s the vandalising of the coaches in order to get to that copper‚” said Grant.

“The actual vandalising that has been going on has cost us hundreds of millions of rands.”

Cape Town mayoral committee member for transport Brett Herron said in the past three years 140 coaches had been damaged by fire‚ at a rate of almost one a week.

“We need to get out into the communities. I think we need to show them what the future looks like‚ but the communities must also understand we need their partnership as commuters to help us identify people who are hell-bent on destroying the opportunities which are created by rail as the backbone of the public transport sector within the Western Cape‚” he said.

The main Metrorail union says Transport Minister Blade Nzimande’s visit to Cape Town on Friday will do nothing to stop saboteurs torching trains.
News
1 year ago

Another train went up in flames in Cape Town on Thursday.
News
1 year ago

While new trains are being built to replace ageing rolling stock‚ it is not clear when they will reach Cape Town.

“Two weeks ago I was at Gibela [the company building the trains in Nigel‚ Gauteng]‚ and there are new trains coming off the production line‚ but we can’t bring those new trains here until there are facilities to service them and also to ensure that they are not going to be affected [by arson attacks]‚” said Grant.

The city council is flying drones along railway lines at night‚ equipped with infra-red cameras that can locate criminals targeting infrastructure. They can be tracked until authorities catch up to them‚ cutting the costs of using manpower for patrols.

“Those considerations are being taken very positively by the national police commissioner himself. Once the decisions have been made then the decisions on whether we can use drones or not will be implemented‚” he said.

Recently‚ a train arsonist was sentenced to nine years’ imprisonment for what Jula called “pure criminality”‚ but police were still investigating the broader motives for the city-wide destruction.

They want to target the infrastructure so that they can remove copper.

“We have some progress on some of the cases which have been opened. A number of other cases are still under investigation at the moment‚ and we are trying to get to the bottom of why this is actually happening in the province‚” he said.

“In many areas of Cape Town‚ especially in Bishop Lavis and along the central line‚ there is vandalism that is due to those that don’t really have work who have to earn a living. They want to target the infrastructure so that they can remove copper and other parts.”

Police stepped up operations on railway lines last year and made 131 arrests for offences ranging from possession of stolen property and stolen cables to murders and attempted murders‚ said Jula.

Nzimande admitted that paralysis in dealing with the problem over the past three years was due to the fact that local‚ provincial‚ and national government had been working in silos.

Transport Minister Blade Nzimande has “cleared his schedule” to visit Cape Town on Friday after the latest in a series of train fires.
News
1 year ago

Two trains went up in flames at Cape Town station on Saturday afternoon.
News
1 year ago