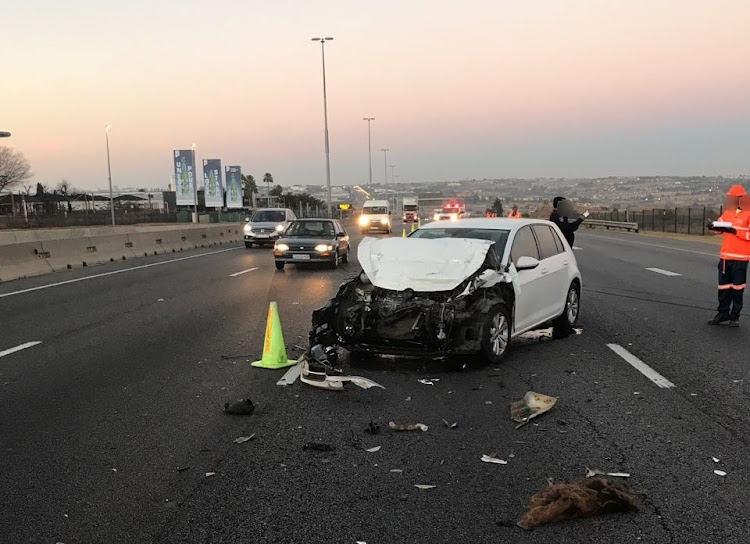 Two people died in a collision on the N1 Ben Schoeman Highway in Midrand on July 29 2018.
Image: Netcare 911

Two people were killed in a collision between a mini-bus taxi and a car on the Ben Schoeman highway in Midrand‚ north of Johannesburg‚ on Sunday morning.

“Reports from the scene indicate that two women in their mid thirties tragically died and four other patients sustained injuries in a collision between a mini-bus taxi and a light motor vehicle‚” said Netcare 911 spokesman Shawn Herbst.

“All the patients were treated on scene and transported by another private ambulance service to hospital for further treatment.

“All necessary authorities were on scene to investigate‚” he added.

The accident occurred at about 6am.

Man knocked over and killed by truck

Meanwhile a man‚ believed to be in his 20s‚ was killed on Saturday night when he was hit by a truck on the R53‚ about 15km outside Potchefstroom.

“ER24 paramedics arrived on the scene at 8pm last night to find the body of the man lying on the side of the road. The truck that had hit the man had come to a stop a short distance away.

“Paramedics assessed the man and found that he had sustained numerous injuries and showed no signs of life. Unfortunately‚ nothing could be done for him and he was declared dead‚” said ER24 spokesman Russel Meiring.

The driver of the truck was uninjured‚ he said.