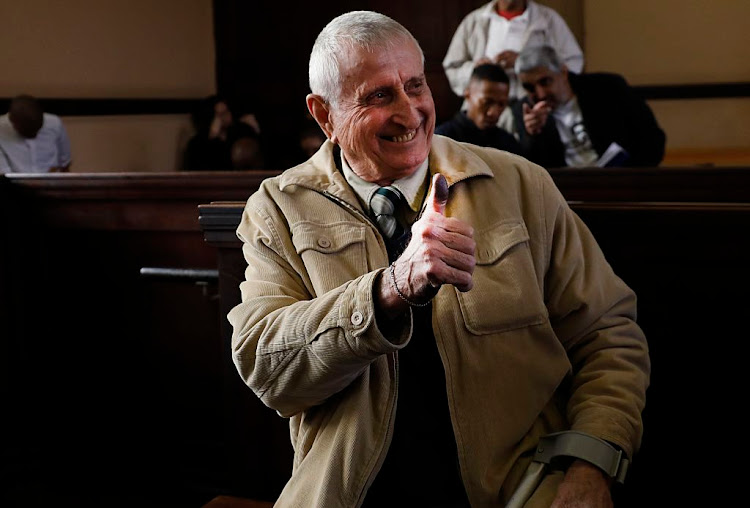 Former apartheid-era policeman Joao Rodrigues is planning to plead not guilty to a charge of murdering activist Ahmed Timol in 1971.

Rodrigues appeared in the Johannesburg Magistrate’s Court on Monday in connection with Timol's death nearly 47 years ago.

In an affidavit read out in court Rodrigues said‚ “I intend to plead not guilty to the charges against me."

Rodrigues said that a judge handling inquest proceedings had found him not to have been present when Timol fell to his death from a police building.

He told the court that he would not attempt to evade trial‚ endanger the public nor influence any witnesses. "I will not do anything that will undermine the proper functioning of the criminal justice system."

Rodrigues‚ whose lawyer said he was aged 79‚ handed himself over to the police on Sunday. The frail-looking man walked up the stairs from the holding cells at court aided by crutches.

He smiled as he chatted with an unidentified man who stood waiting for him to emerge from the holding cells. His counsel told the court that he was suffering from ailments related to old age. He had recently undergone a foot operation‚ the court was told.

The state did not oppose bail as he had a fixed address and did not pose a flight risk.

Rodrigues gave evidence in last year’s reopened inquest into Timol’s death in the Pretoria High Court which replaced the 1972 court’s suicide finding with one of murder.

Rodrigues was a member of the security branch administration and was allegedly the last known person to have seen Timol alive before the 29-year-old activist fell to his death from a 10th floor window at John Vorster Square (now known as Johannesburg central police station) in 1971.

Magistrate Carlo Labuschagne ruled it was in the interest of justice that Rodrigues be released on bail of R2,000.

The team of investigators‚ lawyers and human rights advocates behind last year’s reopening of the 46-year-old inquest into the murder in police ...
News
4 years ago