Henri a victim, not a killer, Janse van Rensburg insists 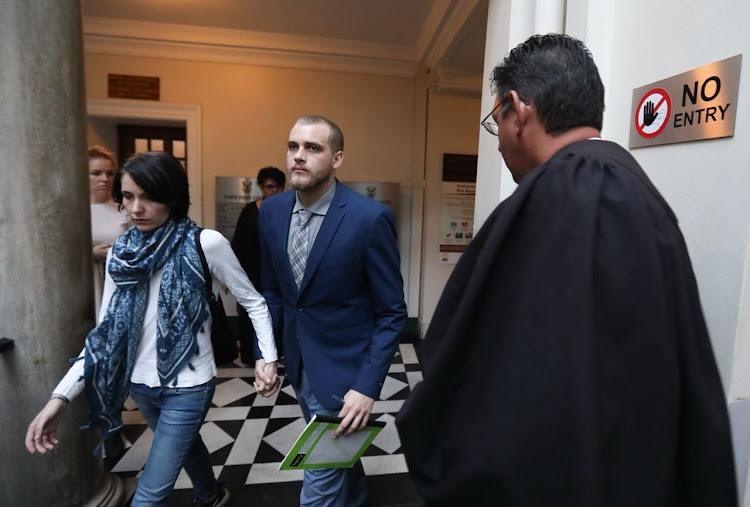 Henri van Breda’s girlfriend‚ Danielle Janse van Rensburg‚ has broken her silence on the conviction and sentencing of her boyfriend for the gruesome murders of his parents and brother‚ and attempted murder of his sister at their luxury Stellenbosch home in 2015.

Janse van Rensburg was like a silent ghost at Van Breda’s trial – always there supporting him but not saying a word.

She got thinner and thinner as the case dragged on‚ and was often seen slipping into Castellos‚ the coffee shop opposite the High Court in Cape Town‚ wearing tiny jeans and a face of anguish.

Since his conviction in May by Judge Siraj Desai‚ she has stayed mum‚ fuelling rumours that she was to be paid handsomely by an Australian television company for exclusive rights to a post-conviction interview.

Now‚ in an episode of 60 Minutes flighted in Australia‚ Janse van Rensburg told the TV show’s interviewer Liz Hayes‚ that she was “very confident in the appeal”.

According to 9News.com‚ the digital platform for the same outlet that flights the 60 Minutes show‚ Hayes interviewed Janse van Rensburg‚ and other key players‚ on South African soil.

Janse van Rensburg told Hayes that her boyfriend was a victim‚ not a killer‚ and was “unable to hurt anything”‚ let alone kill his loved ones.

She also believed every word of the story he told in his plea statement and in court alike. She told Hayes: “He told me everything. He was very open. He was very honest. His story still always made sense to me‚ with the lack of evidence … we are very confident in the appeal.”

Writing for 9News.com‚ reporter Liz Little said that it was clear from the interview with Hayes that “for all the flaws in Henri van Breda’s version of events and the staggering weight (of evidence) against him‚ his girlfriend Danielle justifies much of it with his recent diagnosis of epilepsy”.

Little said that the interview with Hayes showed that “the many inconsistencies in his (Van Breda’s) story” were explained away for Janse van Rensburg by the alleged seizure that he had suffered.

“It’s not necessarily the reason‚ it just does put a lot of things together‚” Janse van Rensburg said in the interview. “Maybe things that I was previously a bit confused about absolutely made sense.”

Marli van Breda‚ whose brother Henri received three life sentences for an attempt on her life and the brutal murder of their parents and brother, ...
News
3 years ago

Van Breda the bizarre: The many faces of a family axe killer

Throughout his trial, conviction and sentencing, he went from confident to cocky to crestfallen to consumed by denial
News
3 years ago

It is not unusual for the partner of a murder accused to stand by the person in the dock‚ or to defend their innocence even when a court of law has decided otherwise. But in this case the couple only became an item after the crimes were committed.

When Janse van Rensburg first met Van Breda‚ the two were enrolled for a cooking course at the Capsicum Chef School in Salt River. It was February 2016‚ a year after the bloody axe murders had transpired at the luxury estate.

Somehow quarantined from the media frenzy surrounding the case‚ and the public hunger to discuss it at every water cooler‚ Janse van Rensburg claimed she knew nothing of the triple murders – let alone the rumours flying about that surviving son Van Breda’s days were numbered before police would come knocking at the door.

It must have come as a nasty shock‚ then‚ in June that year‚ when Van Breda was advised by his legal team to hand himself over for arrest.

The National Prosecuting Authority had‚ by then‚ a dossier thick with evidence to make the arrest. Out on bail worth R100‚000‚ Van Breda was arrested in September that year alongside Janse van Rensburg. The two were apprehended in Table View for being in possession of marijuana.

Held overnight‚ Van Breda was then released on a further R1‚000 bail‚ while his girlfriend was released on the same night as the arrest and let out on R200 bail.

But‚ when the two arrived in court for the case in April last year‚ Janse van Rensburg said the dagga was hers. The charges were withdrawn.

Then‚ and now‚ she has stood by him – claiming his innocence and supporting him in court. This is against the backdrop of the overwhelming view that Van Breda had indeed wielded an axe and wiped out three family members.

The application for Van Breda’s leave to appeal will be heard on August 14.