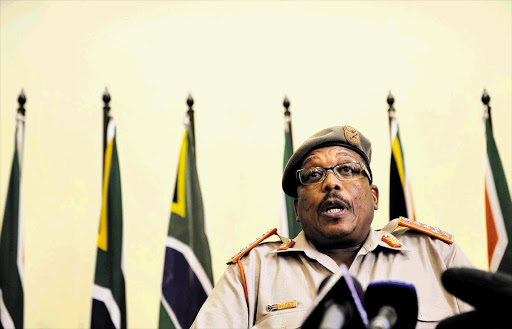 The SA National Defence Force says it has taken a decision to find ways of doing things internally since it faces serious budgetary constraints that limit its ability to procure services from outside.

Chief of the SANDF general Solly Shoke told journalists on Tuesday that personnel were being trained in Cuba in order to create internal capacity.

“We felt that outsourcing is not good‚ we should do our own. In May we took a decision to do things internally because we face serious budgetary constraints‚” he said at a media briefing on the state of the SANDF.

“The Cubans are training our people. There are many being trained in other institutions so that we can have the mastery and stop outsourcing. We are even considering producing our own food so that we [will] be able to survive‚ with these budgetary cuts. If it goes on like this‚ it is going to be difficult‚” said Shoke.

Rapport newspaper recently reported that an SAA aircraft‚ chartered by the SANDF to transport Cuban technicians‚ had been stopped at Waterkloof air force base after customs officials found R4 and R5 rifles with ammunition aboard. SAA regulations do not permit the transportation of “munitions of war” and the aircraft was prevented from leaving.

The SANDF later rejected the report‚ saying the equipment in question was heavy vehicle simulators for training purposes [which] were cleared by customs and Armscor following due process.

Shoke emphasised that the SANDF had done nothing wrong while moving the equipment to Cuba to train its personnel. “Somebody in our own department decided to leak information which was not correct. These things were not being exported. That is our equipment which is no longer in use. It is our own equipment. We are training our own people‚” Shoke said.

About two months ago‚ defence minister Nosiviwe Mapisa-Nqakula lamented the decline in the budget of the SANDF‚ saying it was hampering its effectiveness. The budget was slashed by R5.8-billion this year. Mapisa-Nqakula said if it were assumed that budget cuts would persist‚ urgent steps would have to be taken to create a more sustainable defence capability.

The SA National Defence Force (SANDF) on Wednesday rejected reports that it had tried to smuggle small arms and ammunition to Cuba aboard a chartered ...
News
4 years ago

A Reserve Force Unit in Pietermaritzburg travelling in a military vehicle on the N3 in KwaZulu-Natal was involved in an accident‚ during which four ...
News
4 years ago