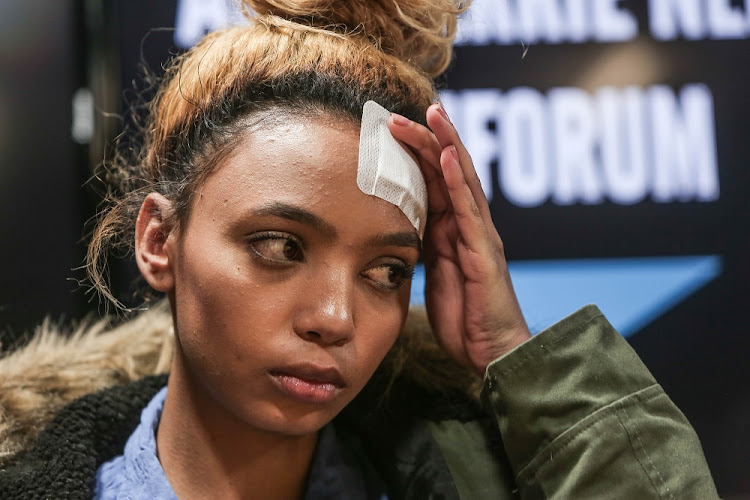 Gabriella Engels' mother Debbie says her daughter is not ready to speak to the media about the alleged assault charges they have against Zimbabwean former first lady Grace Mugabe
Image: Alaister Russell/The Times

Gabriella Engels’ mother said that the judgment which could see former Zimbabwean first lady Grace Mugabe facing trial for allegedly assaulting her daughter was a “big victory” that showed nobody was above the law.

“I told my daughter that‚ no matter what happens‚ I’m proud of her. Whether this case goes to trial or not‚ she stood up for herself. And she showed other people how to stand up for themselves‚” Debbie Engels said during an interview with TimesLIVE on Monday evening.

“I always tell her: you don’t need an elephant to take down another elephant. You need a mouse. She has shown that.

“A lot of people would not have done what Gabriella did. They would have taken the money and walked away. But she didn’t do that.”

Engels has repeatedly claimed that Gabriella was offered cash to drop her assault with intent to cause grievous bodily harm case against Mugabe. But she is adamant that “money cannot buy justice”.

She told TimesLIVE that her and her now 21-year-old model daughter had initially followed Monday’s high court’s ruling on the legality pertaining the diplomatic immunity given to Mugabe – after she allegedly attacked Gabriella and two other young women in August last year – via Twitter.

“But when we saw that first tweet [that the diplomatic immunity was unlawful]‚ I turned on the TV. We were so happy. I was so elated; I was jumping up and down like a little kid in a toy store.”

Gabriella made headlines after she went public with allegations that Mugabe had attacked her with an extension cord in a Sandton hotel. Images of her injuries soon went viral on social media‚ and she became the target of vicious online attacks.

Even now‚ her mother said‚ Gabriella was not ready to speak to the media about her reaction to the high court ruling that could see her taking the stand against Mugabe.

“It was very difficult in the beginning‚ when people were spreading all kinds of lies about her. But she actually grew a thick skin. This has made her very strong.

Mafokate was not in court for the ruling.
TshisaLIVE
3 years ago

“A lot of people told us that we were wasting our time‚ and we are never going to win this case. So this is a big victory.”

And is Gabriella ready to face Grace Mugabe at a trial?

“We will deal with that when the time comes. We trust in God‚” Debbie said.

She added that‚ despite some of the vitriol that Gabriella experienced‚ she was also overwhelmed by the love and support of ordinary people‚ including many Zimbabweans.

“People would find her on social media‚ or get hold of her number and send her messages of love and encouragement. That helped so much‚ it lifted both of us.”