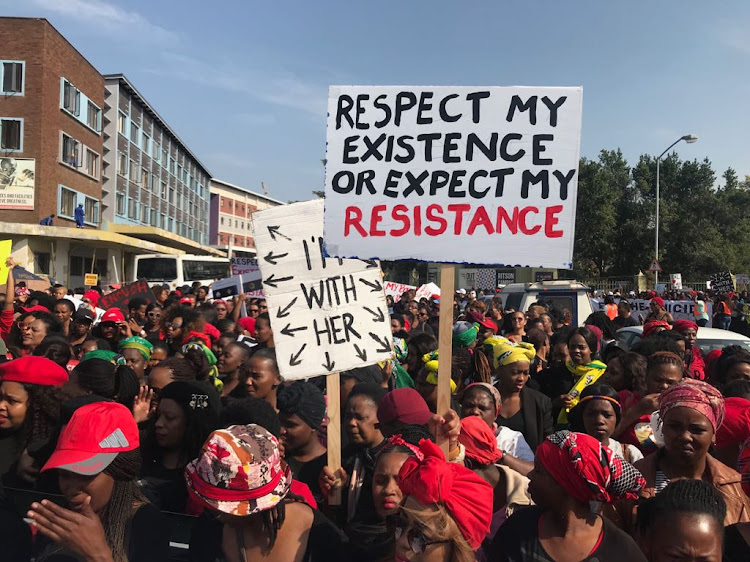 A female paramedic and doctor have broken their silence about incidents of gender based violence by men while on duty
Image: Thuli Dlamini

As women marched against violence and femicide as part of the #NationalShutdown‚ a doctor and paramedic have spoken up about the appalling abuse they endure as women in the line of duty.

Kim Williams‚ a paramedic with the City of Johannesburg Fire Department‚ wrote a hard-hitting account on Thursday of how female first responders to an emergency have to deal with sexism‚ sexual harassment‚ racism‚ threats and violence on a daily basis and were just expected to “suck it up”.

Amazing how this makes the news, sadly we as female first responders deal with this every day on the road...sexism,...

Williams added: “Women spend money to take self-defence classes to protect themselves from men. Women are told to watch what they wear so men don't rape them. Surely we should be fighting against women abuse‚ sexual harassment and rape everyday … not 31 days but 365 days.”

“Sadly we see how these victims of rape and domestic violence are treated by the very people who should be helping‚ treating‚ serving‚ protecting‚ holding their hands‚ counselling [and] not judging.”

She believes parents should teach their sons right from wrong and advised fathers to “drop the mucho act teach your sons to love and respect girls”.

“If someone else’s son did that to your little girl … well‚ we all know what you would like to do. Now what happens when it’s your son who has done the act?”

As part of the #TotalShutdown marches that are happening across South Africa in protest against gender-based violence‚ a document containing a total ...
News
3 years ago

Williams was responding to a video that Dr Masego Setlhodi‚ of Leratong Hospital in Krugersdorp‚ Gauteng‚ had posted on social media about a jarring incident that had frightened her.

The video shows Setlhodi treating an injured child in the hospital and the father and other people threatening her life.

Setlhodi said she tried to talk to the father after the results of a scan were delayed. “I was told to shut up because I’m a woman! He doesn’t speak to women.”

She told him to stop being aggressive in front of her patients.

“[I’m] sworn at profusely not [by] one man‚ but three men. I’m not only verbally abused‚ but threatened to be dealt with and be shot. And raped by the gestures indicated by the other man‚” Setlhodi said.

She believes health professionals had been reduced to “doormats” and said on Facebook that she thought “long and very hard” about posting the video.

I’ve thought long and very hard about posting this video and the repercussions that might follow but I’m done suffering...

“I’m done suffering in silence about such behaviours towards us as health professionals.”

Setlhodi said she has previously been verbally abused by men while on duty and “this is the last time I keep quiet about it”.

“Surely if patients can post videos of us ‘neglecting’ then clearly I can!!”

Women across South Africa were united on Wednesday as they took part in #TotalShutdown marches.
News
3 years ago

'I hang my head in shame,' says Ramaphosa over gender-based violence

President Cyril Ramaphosa said he was deeply upset at hearing the stories of abuse suffered by South African women, as he addressed protesters taking ...
News
3 years ago

I shot him‚ but his sexual abuse made me do it, says woman who married adoptive father

The Brakpan woman standing trial for the murder of her husband told the Pretoria High Court that she was tired of constant sexual harassment.
News
3 years ago