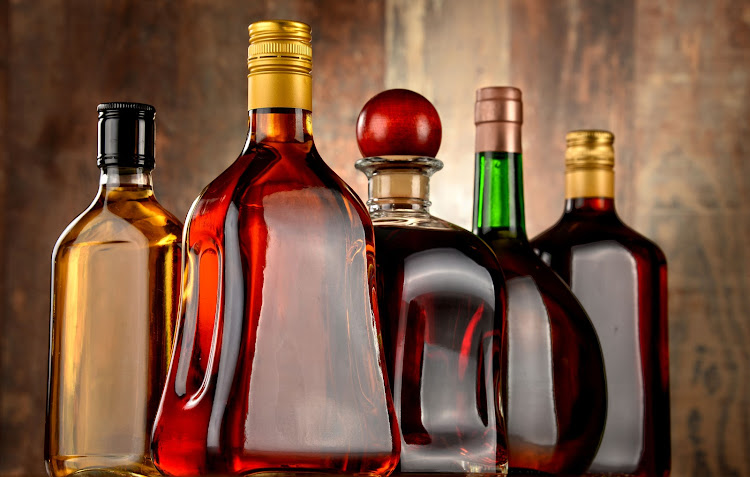 Three men robbed a bottle store, in Edenvale, of R50‚000 worth of alcohol‚ smokes and premium drinks‚ including high end whisky on 4 August 2018.
Image: 123RF/ monticello

Hillbrow police have recovered about R50‚000 worth of whiskies and cigarettes after shooting at a suspected thieves' car and causing it to crash.

Sergeant Mduduzi Zondo said at about one pm on Saturday three men robbed a bottle store in Edenvale - of R50‚000 worth of alcohol‚ smokes and premium drinks‚ including high end whisky.

A suspicious looking car was later reported to police in Hillbrow.

As police neared the car‚ it sped away.

Zondo said‚ “police gave chase and then opened fire and the driver lost control of the car and crashed into a parked taxi on the corner of Klein Street in Hillbrow.”

He and other the suspect escaped.

Police arrested one suspect who had been a passenger in the back of the car.

“We are looking for the other suspects‚” said Zondo.

“The suspect will be charged with business robbery‚ being in possession of an unlicensed firearm and possession of stolen goods. He will likely appear in court on Monday‚” said Zondo

A man under surveillance by the American authorities for suspected drug trafficking met his match in South Africa last month when he was arrested‚ ...
News
2 years ago

The Addo Elephant Park ranger who fatally shot his one-year-old foster child and wounded his wife – who was holding the toddler at the time – has ...
News
2 years ago

Police have hailed the arrest of a 28-year-old man on Tuesday night as a breakthrough in a string of murders at old age homes in Pietermaritzburg in ...
News
2 years ago