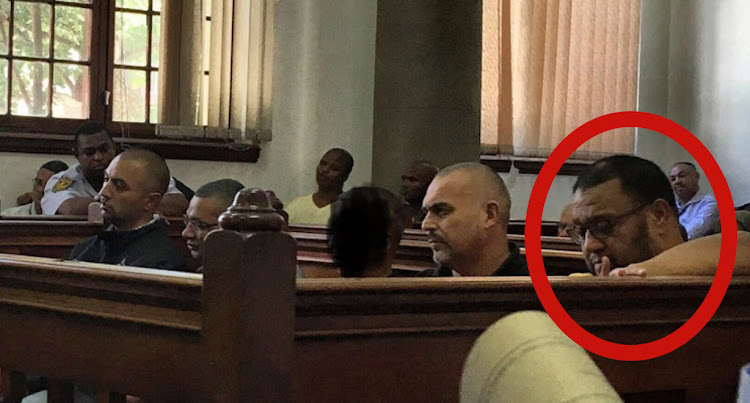 Carl Lackay (highlighted) in the Cape Town Magistrate’s court on charges of extortion of a popular restaurant in Cape Town. Lackay was murdered on August 5, 2018 in Belhar, Cape Town. The murder comes just a week after Jerome ‘Donkie’ Booysen was shot in Kuilsriver in an alleged assassination attempt.
Image: Anthony Molyneaux

A man implicated in an extortion syndicate in Cape Town was shot five times in an apparent hit in Belhar‚ Cape Town.

Police confirmed the death of 45-year-old Carl Lakay in a shooting incident as he sat in his car in a driveway in Paarl Street at 8.30pm on Sunday.

Lakay was part of a group headed by Nafiz Modack and Colin Booysen‚ who were allegedly behind the takeover of nightclub security from another group‚ headed by Mark Lifman‚ Jerome “Donkie” Booysen and Andre Naude. It is alleged that both groups used extortion to strong-arm nightclub owners into paying for security services at their establishments.

Lakay was expected to stand trial along with Modack‚ Booysen‚ Jacques Cronje and Ashley Fields in the Cape Town Regional Court in November on charges of extortion and intimidation relating to their alleged extortion of Grand Cafe Africa in Green Point.

Lakay owned a security company that was allegedly linked to the group’s alleged extortion activities.

His death comes after Donkie‚ alleged boss of the Sexy Boys gang‚ was shot at a Spur restaurant at Kuils River last week by a member of the rival Hard Livings gang.

He survived after the man reportedly “froze” as he approached with a drawn pistol. Donkie was shot once in the left arm before retaliating with his own firearm‚ shooting the man in the head.

At least three people were killed and three others injured in violence between the Hard Livings and Americans gangs in the days after Donkie’s shooting.

TimesLIVE reported last week that various gangs had joined forces with either Hard Livings or the Americans. The Sexy Boys reportedly allied themselves with the Americans.

Modack’s group appeared in court last week‚ when lawyers said Donkie’s attacker had been seen in court during their appearance the previous week.

Booysen’s lawyer Bruce Hendricks‚ who also represents Donkie‚ and Modack’s lawyer Edwin Grobler‚ told the court that their clients’ safety was being jeopardised because every time they came to court with bodyguards‚ officers from Cape Town central police station would confiscate their firearms and take them in for questioning.

They said at the time that in light of the attack on Donkie‚ it was necessary for their clients to be protected.

On Monday‚ Modack told TimesLIVE that Lakay’s shooting was a “hit” and that he had been shot twice in the head and three times in the torso.

“Whoever did it got away‚ so we don’t know who it was. Colin and I have beefed up security‚ seen and unseen‚” said Modack.

“Our guys have assault rifles and everything. Whoever wants to come after us‚ they must come. We’re ready for them.”

The Donkie with six lives: Attempted assassination on alleged gang boss was the sixth since last year

Alleged Sexy Boys gang leader Jerome “Donkie” Booysen was shot on Wednesday afternoon in what is the sixth attempt on his life since the beginning of ...
News
3 years ago

An alleged Cape Town extortion racketeer was arrested on Monday night after an alleged assault and intimidation incident in Diep River on Wednesday.
News
3 years ago