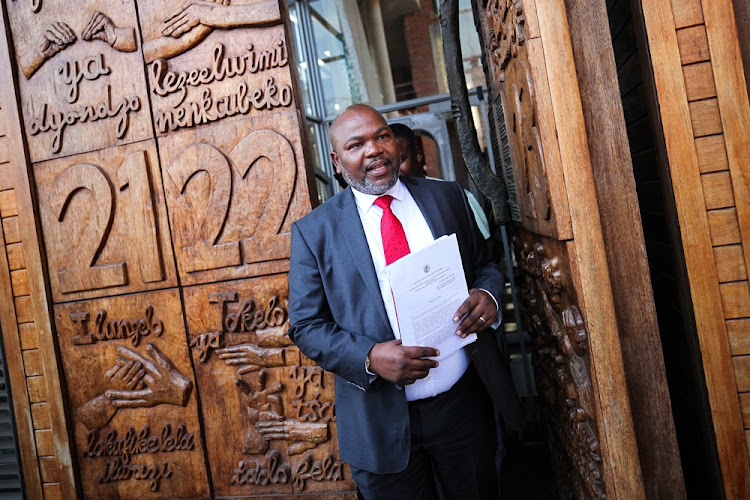 Former NPA head Mxolisi Nxasana talks to journalists at the Constitutional Court in Johannesburg on August 13 2018. The court ruled that the appointment of Shaun Abrahams as NPA head was unconstitutional and invalid.
Image: Alaister Russell/The Sunday Times

Civil rights organisations have welcomed a Constitutional Court judgment which found the appointment of Shaun Abrahams as the country’s National Director of Public Prosecutions to be unlawful.

On Monday the highest court in the land ruled that his appointment was invalid because he had benefited from former president Jacob Zuma’s abuse of power.

“South Africa deserves a National Director of Public Prosecutions that will prosecute without fear‚ favour or prejudice. I was there when the NPA was established‚ and I therefore look forward to the NPA again being restored to an institution of prosecutors that prosecutes in favour of the community‚” said Gerrie Nel‚ Afriforum’s head of private prosecution.

Nel said it was important that the NPA regain public trust and that equality before the law prevailed.

He said the organisation was relieved that a decision had been made that neither Abrahams nor Mxolisi Nxasana should head the NPA.

“This decision gives finality to the matter and encourages much-needed stability in the National Prosecuting Authority. The decision also underlines the abuse of power by former president Jacob Zuma and the rot that flowed from this‚ including the settlement which tainted Mxolisi Nxasana and pushed him out of office and the now-invalid appointment of Abrahams.”

Outa also welcomed the court’s direction that Nxasana must repay R10.2-million of the R17.3-million “golden handshake” he received to vacate his post as former NPA head.

Parliament’s Portfolio Committee on Justice and Correctional Services said it had noted the judgment.

Committee chairperson Dr Mathole Motsheka said the court’s finding that Abrahams’ appointment was unconstitutional and invalid should bring closure to a long-drawn-out chapter.

South Africa’s highest court ruled on August 13 2018 that Advocate Shaun Abrahams was not validly appointed to lead the National Prosecuting Authority (NPA) because he had benefited from former President Jacob Zuma’s abuse of power. Justice Mbuyiseli Madlanga, writing on behalf of the Constitutional Court’s majority, found that Zuma had used a R17,3-million “golden handshake” to get rid of former NPA head Mxolisi Nxasana.