South Africa’s highest court ruled on Monday that Advocate Shaun Abrahams was not validly appointed to lead the National Prosecuting Authority (NPA) because he had benefited from former President Jacob Zuma’s abuse of power.

President Cyril Ramaphosa now has 90 days to appoint a replacement for Abrahams.

Justice Mbuyiseli Madlanga, writing on behalf of the Constitutional Court’s majority, found that Zuma had used a R17.3 million “golden handshake” to get rid of former NPA head Mxolisi Nxasana to vacate his post – which Zuma admitted was unlawful – meaning that the subsequent appointment of Abrahams was invalid.

The court said it would not be in the interests of stability at the NPA for Nxasana to be reappointed into his position, as he may well face an inquiry into his fitness for agreeing to the illegal Zuma payout.

Image: Alaister Russell/The Sunday Times Former NPA head Mxolisi Nxasana talks to journalists at the Constitutional Court in Johannesburg on August 13 2018. The court ruled that the appointment of Shaun Abrahams as NPA head was unconstitutional and invalid.

The court said the facts of the case led to the inescapable inference that Zuma was “effectively buying Mr Nxasana out of office” with that deal, specifically given that Zuma had failed to follow through on proceeding with an inquiry into Nxasana’s fitness to hold office.

Nxasana has claimed that he was forced out of his position because Zuma was convinced that he intended to prosecute him for corruption.

He has been ordered to pay back R10.2-million of his settlement deal.

Ramaphosa identified “leadership issues” at the NPA as one of his administration’s key concerns in his first “State of the Nation” address, but said he was waiting for today’s ruling before making any decisions on Abrahams future. 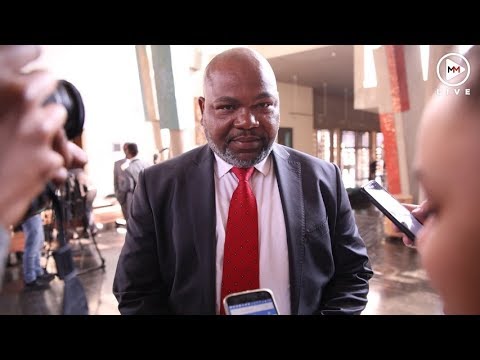 The president is deciding whether to suspend controversial prosecutions heavyweights Nomgcobo Jiba and Lawrence Mrwebi, who have been lambasted in multiple court rulings.

The pair returned to work after the Appeal Court narrowly reversed a High Court judgment that found them unfit to practice as advocates.

In December 2017 three Pretoria High Court judges – led by Judge President Dunstan Mlambo – found that the settlement deal that Zuma gave Nxasana to leave his position was invalid and violated the NPA Act.

Mlambo and his fellow judges rejected arguments by Abrahams, Zuma and the NPA that Abrahams should be allowed to stay in his post – despite this illegality.

“Is it just and equitable to leave Adv Abrahams untouched in the office? We do not believe it is, for these reasons. First, if the vindication of the Constitution is paramount, an order which leaves Adv Abrahams' position intact does not serve that objective. As remarked above, the President will have achieved, through unlawful means, precisely what he had wished to attain all along”.

The Constitutional Court’s majority supported the High Court’s ruling, but found that the High Court was wrong not to consider Nxasana’s evidence about his removal, because it was filed too late.