Hout Bay fishermen launch their own search for missing ‘poacher’ 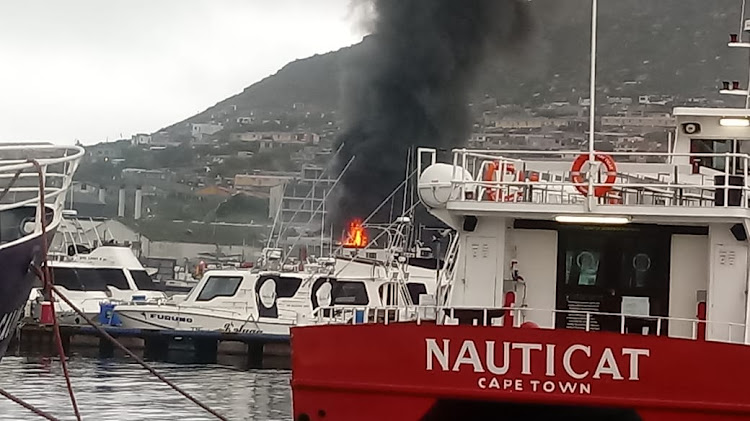 Hout Bay fishermen launched two of their own boats on Monday to find an alleged poacher who went missing at sea when he and two others tried to escape police on an anti-poaching patrol on Saturday.

An angry crowd gathered in Hout Bay harbour after the court appearance of alleged poachers in Wynberg‚ Cape Town‚ on Monday.

They claimed that police shot and killed 25-year-old Deurick van Blerk as he and two of his alleged accomplices tried to get away on their rubber duck.

The Department of Agriculture‚ Forestry and Fisheries said that the incident is currently being investigated by police. They attributed violent protests on Sunday to "allegations that the community was unhappy with enforcement efforts that took place on Friday August 9 2018‚ resulting in the arrest of two suspects and the suspected drowning of a third suspect".

It is understood that the men were chased down by police after they illegally harvested crayfish near Hout Bay. By Monday afternoon‚ police divers using jet skis and a boat stopped their search for the body just as the fishermen’s two boats left the harbour to go and search. On board were the two men who were released on bail of R1‚000 each‚ who went along to point out where van Blerk had gone missing.

25-year-old Deurick van Blerk went missing after a run-in with an anti-poaching patrol in the early hours of Saturday morning near Hout Bay. As his family watches on in hope, the search continues.

Van Blerk’s father Edward and mother Christien stood next to the shoreline and watched as police divers on jet skis swept the bay looking for their son. They walked with dozens of community members scanning the rocky shoreline in the hope that he might have washed ashore.

They say they just want to get his body back so they can bury him.

Edward said his son‚ like many community members in Hangberg‚ was trying to make a living from the sea. But unlike when they grew up‚ fishing for crayfish and abalone is now a criminal offence - unless you are one of a handful of small scale fishermen with a permit to catch an ever-decreasing number of fish.

He told TimesLIVE that he needed clarity on what had happened out at sea. “I am just a father who has lost a son. I just want his body‚” he said. “I don’t have anything against anybody.”

Several other community members criticised government authorities for targeting poachers‚ who they claimed were forced to operate illegally due to being excluded from the formal fishing rights allocation process.

Unhappiness over the latest clash led to community members ransacking sections of Hout Bay harbour‚ including the harbourmaster’s office‚ on Sunday.

Family and friends of a missing diver held hands in prayer on Monday‚ a day after violent protests in Hout Bay over his apparent death while poaching ...
News
3 years ago

They also targeted a senior Department of Agriculture Forestry and Fisheries anti-poaching official‚ torching his house and his girlfriend’s car.

The official has since fled to a place of safety. He told TimesLIVE, on condition of anonymity, that his attackers threatened to kill him. “I was not on that operation; it was a police operation‚” he said.

“Shortly after they torched the cold-storage facility‚ I heard rocks falling on my roof‚ then flares. They had knives. I just jumped over my neighbour’s wall and escaped with the clothes on my back‚” said the official.

A large contingent of public order police were deployed to the area as angry fishermen returned from court‚ where police reportedly said that Van Blerk “fell overboard” in the early-morning‚ open-sea chase.

Meanwhile‚ the Department of Agriculture‚ Forestry and Fisheries released a statement on the incident where they made it clear that neither their officials nor personnel were involved in the alleged incident.

“The department is urgently addressing the volatile situation at Hout Bay harbour after violent protests and looting took place on Sunday August 12. The protests resulted in damage to state properties‚ coastal offices of the department being set alight and the lives of the officials on site being seriously threatened‚” they said.

“The department has been informed that in addition to the anti-poaching incident‚ SAPS is also investigating the violent protests and that four suspects have been arrested and will be charged with public violence and arson.”