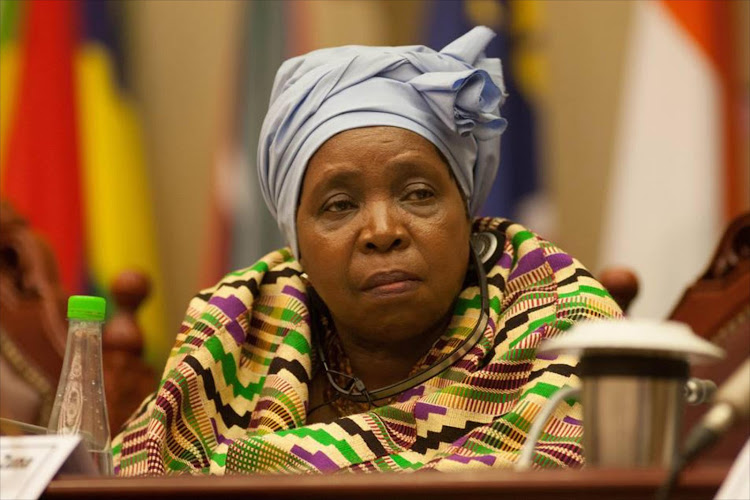 Nkosazana Dlamini-Zuma has told parliament that she could not guarantee that technical glitches would not occur in the distribution of social grants
Image: Getty Images

The government cannot guarantee the smooth payment of social grants and it is pleading with grant beneficiaries to bear with the state as it tries to fix the technical gremlins.

About 700‚000 grant beneficiaries could not access their money in the first week of July due to what the South African Social Security Agency (Sassa) termed "technical glitches" in a new system which involved a large number of grants being distributed through post offices and an introduction of a new card system.

Minister in the Presidency responsible for Monitoring and Evaluation Nkosazana Dlamini-Zuma told MPs in the National Council of Provinces that she could not guarantee that similar hiccups would not be experienced in the coming few months. She was in that house to answer MPs' questions.

"I cannot stand here and guarantee that this month and next month the system would have been upgraded in all the post offices‚" she said.

Dlamini-Zuma said the government was trying to make sure that merchants [supermarkets that also distribute the grants] upload the Sassa bank identification number [Bin] which is a crucial number for processing payments and that they also continue with the swapping of cards from old to new.

"In future‚ but not in the immediate future‚ the Post Office will roll out mobile units to go out to where the people live‚" she said.

"We must all communicate with the beneficiaries that this period is a trying period‚ a period where new systems are being introduced in a very short space of time and there could still be some hitches here and there‚ but we are doing our best that what happened last month should not happen this month."

Dlamini-Zuma said this while responding to a follow-up question from the EFF's Brenda Mathevula about what action the government was taking to make sure that in future grant beneficiaries would receive their grants on time.

Social grant distributing agency Sassa has apologised to the nation for a crisis which led to some grant beneficiaries not being able to access their ...
News
3 years ago

The Monitoring and Evaluationhad minister earlier told MPs that as of August 6 2018‚ at least 3‚373‚630 beneficiaries had been transferred from the old Sassa Cash Paymaster Service (CPS) card to the new Sassa-Post Office card.

She listed among the reasons some beneficiaries were not paid on time the movement to the Post Office which‚ she said meant that there was a new system and that the system had "some teething problems‚ some glitches which need to be corrected".

She said the financial sector industry limitations‚ which only allow a limit of R1‚600 to be paid over the counter‚ also created problems as it meant beneficiaries had to have multiple transactions to get all their money. This had contributed to longer queues‚ she said. But the government had applied to the Payment Association of South Africa to change the R1‚600 limit to R2‚000‚ she revealed.

She added that some merchant points had not loaded the Sassa Bin and would be assisted to do so‚ as the Bin was crucial to making the payments.

Dlamini Zuma said the system at the Post Office was still not able to take very big volumes‚ and could only process 20 transactions per second‚ which was not a lot considering that there were millions of people who needed to be paid across the country.

"These were some of the problems that meant the beneficiaries were not paid on time‚" she said.

"These challenges are because this programme is not a programme that had been properly planned over time. There is a court order that has a deadline that says these beneficiaries must be transferred away from the cash system of CPS. It is not a perfect system‚ it will have to be perfected as we go along‚" she added.

Dlamini Zuma apologised to the beneficiaries who were not paid on time and asked "that they bear with us. It's not because we do not care‚ we care very much and we would like to ensure that they are paid on time without inconvenience and we are trying to do our best to get there."