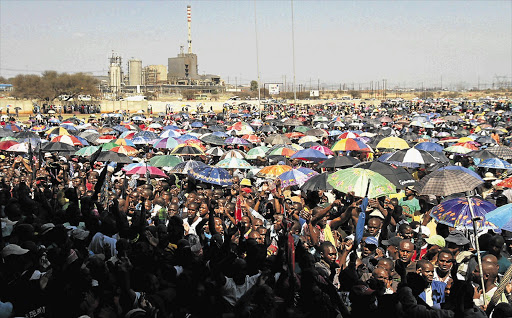 Miners in green‚ black and yellow Association of Mineworkers and Construction Union (Amcu) regalia perched on the infamous Wonderkop koppie at Marikana in North-West on Thursday‚ braving the blazing son to commemorate the day on which 34 of their co-workers were mowed down by police six years ago.

In August 2012 police opened fire on workers from platinum giant Lonmin‚ who were on strike demanding a R12‚500 salary.

Although born in pain and tragedy‚ the day on which the bloody event occurred has become an important event on the country’s calendar. It is often observed by the singing of traditional war songs‚ the donning of diverse traditional attire and men brandishing the sticks that were synonymous with the protracted strike.

Ramaphosa will not be at Marikana

President Cyril Ramaphosa is unhappy with the slow implementation of the Farlam commission of inquiry’s recommendations on Marikana.
Politics
3 years ago

Thabiso Tshangana‚ 35‚ from Tsolo in the Eastern Cape‚ was also colourful in his traditional isiXhosa attire and a beaded stick.

He said that although he was never employed by Lonmin he took part in the strike activities and spent time with the striking miners‚ some from his home village‚ on the koppie in solidarity.

“I was up there in the [koppie] with them although I did not work for the mine. I carried my stick and donned my blanket‚” he said.

In 2015 Tshangana‚ one of the artists entertaining the gathering‚ released an album about the tragic events of Marikana.

The traditional Xhosa folklore artist said he did not perform the song on stage because it would make people sad.

Civil society organisations have commended the new report into the events of August 16 2012 in Marikana near Rustenburg where 34 miners were shot ...
News
3 years ago

"I performed songs of hope instead to encourage the miners to fight on. I could not bring myself to perform 'Marikana'‚" he said.

Many of the mine workers‚ who were singing and marching around the open field‚ had cooler boxes full of alcohol. Some were walking around with cans and bottles of beer‚ drinking openly.