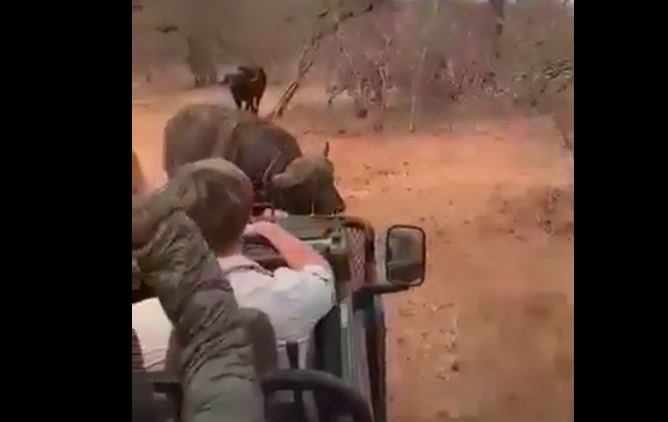 A buffalo made his feelings towards this four-wheeled interloper very clear.
Image: Facebook/Niel Malan

Do not mess with this bull.

Niel Malan posted a video to Facebook last week showing a close encounter between a guide vehicle and a fairly irate buffalo.

In the video, the buffalo slowly approaches the vehicle while its companions look on. The guests are unconcerned at first as the buffalo just seems to pause near the front of the vehicle.

Until it decides enough is enough with this four-wheeled interloper.

Africa is not for sissies...black death from the bush.

The buffalo suddenly rams the vehicle, surprising everyone. The guide slowly backs away but the bull isn't about to give up, attacking the vehicle again and again.

At one point the buffalo rams his horn under the vehicle's fender and tries to lift it, but the guide reverses out of the way.

For a few moments it looks like the buffalo has given up... then it attacks again! After getting in a few more jabs at the annoying interloper, it eventually backs off.

Jessica Lyman was on a drive through the Kruger National Park when she came across a pair of buffalo that had locked horns - and got stuck.
News
3 years ago

WATCH | Buffalo tosses lion into the air to 'save' a lizard

Have you ever seen a lion being tossed into the air by a buffalo, flip three times then land on its feet?
News
3 years ago

Don't mess with this mama.
News
3 years ago