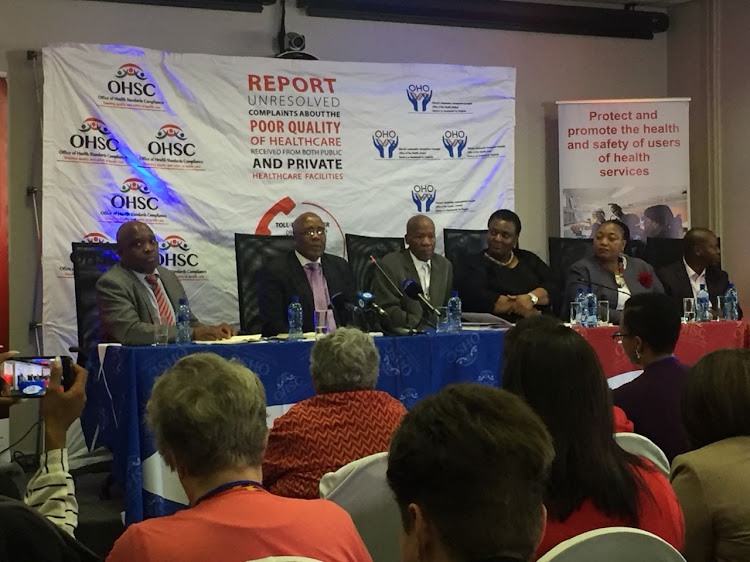 Professor Malegapuru Makgoba during a press briefing where he addressed allegations of human rights violation at the Tower Psychiatric Hospital in the Eastern Cape.
Image: Nhlanhla Ndlove, TimesLIVE

The ombud said that during his time at the hospital in the Eastern Cape‚ Sukeri had discharged patients without following protocol‚ such as ensuring their families were ready to receive them.

"Dr Sukeri's 11 discharged users were not coping well in the community‚ some with relapses and re-admissions. One user was reported missing‚ two users had passed away‚ one user had committed suicide and one user committed murder and has since been arrested‚" said Makgobo.

He was giving a report back on Thursday after an investigation into claims of wrongdoing at the hospital.

Health Ombud professor Malegapuru Makgoba on Thursday poured cold water on allegations of patients being abused at the Tower Hospital in the Eastern ...
News
2 years ago

Makgobo said all of the cases raised questions on the quality of assessment undertaken and decisions taken by Sukeri.

He criticised the psychiatrist for violating patients’ confidentiality when he disclosed details about them to the media‚ alleging they were victims of shoddy practices at the hospital.

Sukeri‚ who claimed to the media that about 90 patients had died at the hospital‚ had told Makgoba that he had "miscalculated the death statistics"‚ labelling this as a "serious mistake".

The embattled psychiatrist had claimed that patients were not fed proper meals and did not have proper clothing. All these allegations were declared to be false by Makgoba who said the only thing that patients had complained about was the portions of food they received.

Commenting on Sukeri's allegations‚ which were published in a Sunday newspaper‚ Makgoba said: “The incidents at Tower Hospital is no 'Life Esidimeni’.”

“They got it wrong on this matter‚” he added.

About three in every 10 South Africans over 60 will need medication for mental health in the future.
News
2 years ago

He emphasised that he had found no prima facie evidence of a deliberate violation of patients at the hospital‚ with the exception of the hospital’s seclusion rooms.

Over an eight-year period at the Tower Hospital‚ a total of 68 mental health patients had died. The hospital caters for 400 patients. “That translates to about 8.5 deaths a year in a 400-bedded hospital. But the media did not capture this and said 90 patients had died‚” said Makgoba. “That is 0.71 deaths a month‚” Makgoba added‚ saying this was 17 times more than the deaths experienced in the Life Esidimeni tragedy.

None of the deaths was as a result of negligence by the hospital.

The Charlotte Maxeke Hospital in Johannesburg is starting to refer patients to other hospitals for operations.
News
2 years ago

Makgoba said during his investigations into the claims‚ Sukeri had admitted that he had “lost his cool” and had approached the media to exaggerate his complaint after having clashed with the CEO of the hospital.

“He said he had no longer cared and was aware he had violated his oath‚” Makgoba added.

Makgoba has since called for disciplinary action to be taken against Sukeri‚ adding that while he no longer practised at the hospital‚ he continued to run a private practice. “He has irretrievably broken all his trust with his colleagues‚” Makgoba added.

“This blew a simple complaint into a national issue which it should not have been‚” he said.