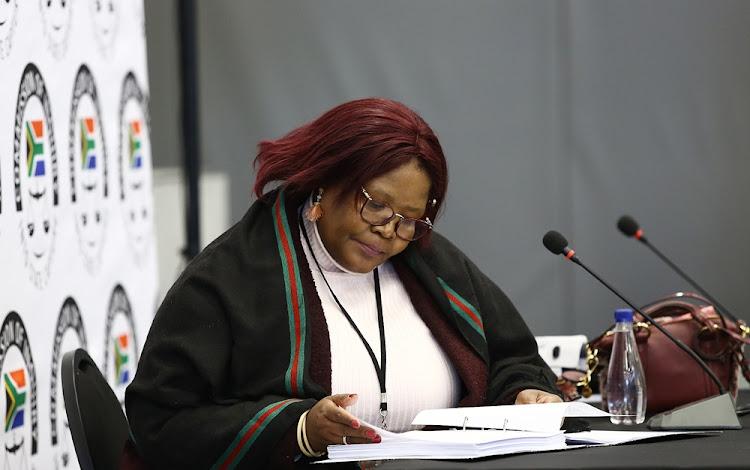 Former ANC MP Vytjie Mentor looks at her papers during a break at the Zondo commission of inquiry into state capture in Parktown, Johannesburg on August 28 2018.
Image: Masi Losi

Judge Raymond Zondo has ordered the legal team of the State Capture Commission of Inquiry to urgently intervene to secure the safety of former ANC MP Vytjie Mentor‚ after she tearfully told him that she was afraid her hotel room had been tampered with.

Mentor informed the judge at the end of her second day of testimony at the inquiry that she did not want to be “alarmist”‚ but that she had discovered two nights before that the latch on her room door was not working. She said she had been staying in the same room every time she travelled to Johannesburg for the commission’s business and for meetings with her lawyers.

Mentor said she alerted the hotel staff that her room was unable to lock and they told her that it had been fixed.

With her voice breaking‚ Mentor said she went back to her room on Tuesday morning as she had forgotten her glasses – and she found that the door would not open with her key card. She said she then turned the handle and the door opened freely.

Wiping away tears‚ Mentor told the judge she did not know what awaited her when she went back to her room after being at the commission the whole day.

A sympathetic Zondo thanked Mentor for bringing the matter to his attention and said she was “right to be concerned” considering that she had implicated a number of people in her testimony.

He asked the commission secretary‚ Khotso de Wee‚ and head of the legal team‚ Advocate Paul Pretorius‚ to ensure that Mentor “feels safe”‚ even if it meant moving her to a different hotel. He also asked the team to consider whether she required additional measures to ensure her protection. “I would like to be informed if proper arrangements are made for her‚” Zondo said.

Pretorius assured the judge that they would attend to the matter immediately.

She concluded her testimony on Tuesday afternoon by relating her interaction with the police when she reported the alleged offer by Ajay Gupta to promote her to minister.

In her hand written statement to the police in May 2016‚ Mentor said that former president Jacob Zuma and several ministers had a corrupt relationship with the Gupta family. The statement said that this gave an “unfair advantage to the Gupta family using state resources and agencies”.

Mentor claimed that a senior member of the Hawks‚ Captain Mandla Mtolo‚ asked her to remove the reference to Zuma in her statement as implicating the president was delaying the investigation.

Mtolo has submitted an affidavit to the commission denying this.

Vytjie Mentor: Jacob Zuma tried to calm me down after Gupta offer

Former ANC MP Vytjie Mentor says Jacob Zuma constantly tried to calm her down after Ajay Gupta had offered her a ministerial job.
News
3 years ago

Former ANC MP Vytjie Mentor is continuing her testimony at the State Capture Inquiry in Johannesburg on Tuesday.
News
3 years ago

Former ANC member of Parliament Vytjie Mentor is expected to deliver explosive  testimony at the state capture inquiry in Johannesburg on Monday.
News
3 years ago