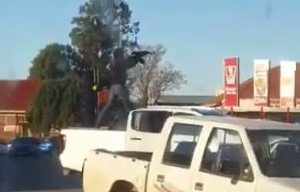 A screenshot of the robbers as they make their getaway from the crime scene.
Image: Jeff Wicks via Twitter

A 13-year-old schoolboy was killed by automatic gunfire as he cowered in a bathroom while a gang of heavily armed robbers attacked a store on Monday afternoon.

The teenager was one of three people killed in the bloody robbery at the F3 Supermarket in Kingsway Road in Bergville‚ KwaZulu-Natal. The robbers fired shots in every direction before entering the shop.

It is understood that the first casualty of the attack was a security guard who had been stationed nearby in an elevated tower. The robbers dragged his body from the post inside the store. A second security guard‚ who had been standing near the entrance‚ was shot in the face‚ and was critically wounded.

Dramatic footage of an armed robbery in Bergville on Monday. Three people were killed, among them a 13-year-old boy @yasantha @TimesSelect @TimesLIVE pic.twitter.com/H0lRHiF0rp

The teen‚ who had taken refuge in the toilet‚ was the last to be killed as gunmen sprayed the inside of the room. The guard and two others who were wounded were rushed to hospital after the gunmen fled the scene.

Police spokeswoman Colonel Thembeka Mbele had not responded to requests for comment at the time of publishing.

Social media users have called on the community and police to stand together after a video of a robbery was posted on Facebook on Wednesday.
News
3 years ago

Armed robbers made off with 50 luxury watches and R20‚000 in cash in a weekend heist executed in record time.
News
4 years ago