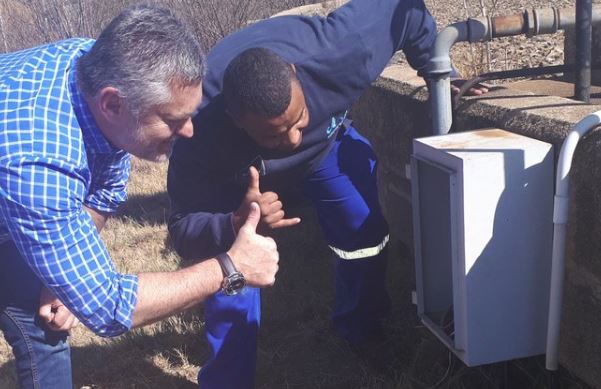 MMC for Environment and Infrastructure Nico de Jager and technicians give the thumbs.
Image: Isaac Dhludhlu via Twitter

The City of Johannesburg says water will be restored to most areas affected by outages as a result of a substation that caught fire on Monday.

Fire erupted at a substation in Eikenhof‚ south of Johannesburg‚ plunging parts of the city into darkness and interrupting water supplies to numerous areas.

“We are currently pumping water to our reservoirs. We have restored water to some areas‚ including Orlando‚” said MMC for Environment and Infrastructure Nico de Jager on Wednesday.

Other areas where water has already been restored include Radiokop‚ Weltevredenpark‚ Wilgeheuwel and surrounding areas.

“We will have water restored to most‚ if not all‚ areas by 6pm [on Wednesday]‚ even if it is at a reduced rate.”

De Jager said a lot of work had gone into making sure that power and water were restored in all affected areas since the substation caught fire.

“A lot of people have been working behind the scenes. When I went to the site yesterday [Tuesday]‚ there were about 40 people on site. Physical workers keep relieving each other because the work that goes into releasing transformers is immense.”

“This has been amazing. The work that would have taken weeks to do‚ was done in 72 hours. This is because from July 1‚ at the start of the new financial year‚ we started spending money on refurbishing old transformers.”

He said the city was aiming at refurbishing 55 transformers by the end of the next financial year. “Some transformers are quite old‚” De Jager said.

Meanwhile‚ the City of Tshwane confirmed that Rand Water was planning a shutdown of the water supply to Hartebeeshoek Reservoir in Akasia‚ north of Pretoria‚ next week.

The shutdown – taking place on September 5 from 6am to 6am the following morning – was “necessitated by the need to carry out emergency repairs on a damaged 1‚500mm diameter isolating valve at the reservoir”.

Reservoirs that are supplied by the Hartebeeshoek reservoir will be filled to capacity to ensure provision of water to residents during the shutdown period‚ the city said.

“However‚ residents are cautioned to use water sparingly to avoid the rapid drop in water level in the reservoir – a situation that will lead to service interruption.”

If there was an interruption‚ the city said‚ residents in the following areas would be affected:

Johannesburg City Power says power has been fully restored to the suburbs that were cut off after the Eikenhof substation caught fire on Monday.
News
3 years ago

A fire that erupted at a substation in Eikenhof‚ south of Johannesburg‚ plunging parts of the city into darkness and interrupting water supplies ...
News
3 years ago

MPs have called for water infrastructure to be declared a national key point‚ following this week’s disruption to water supplies in Johannesburg.
Politics
3 years ago

A transformer fire at a substation in Eikenhof‚ Johannesburg‚ has led to a power outage in several suburbs.
News
3 years ago