Ethiopian shopkeeper locked inside workplace before it was torched 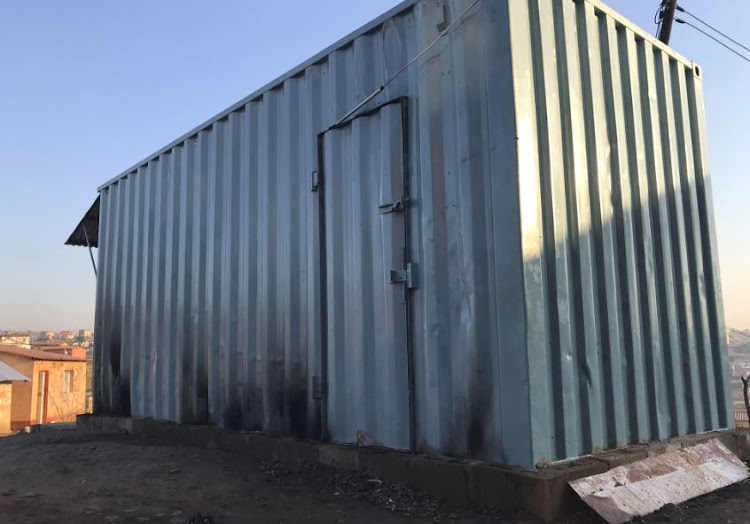 The shopkeeper’s cries for help awoke his neighbour who eventually saved him from the fire.
Image: Jeff Wicks via Twitter

Miratu Daimo was locked inside the Newlands West‚ Durban‚ spaza shop where he worked – and then the men who seemingly shut him inside torched the container late on Thursday night.

The move to barricade the 22-year-old shopkeeper inside before setting the container ablaze was calculated and intended to kill‚ his boss‚ Zade Chongso‚ said.

“He was inside sleeping and all of a sudden there was smoke inside. He got up and he was trying to get outside‚ but the door was locked from the outside‚” he told TimesLIVE from the hospital where Daimo is being treated.

“He was lucky that the neighbours there heard him screaming when he couldn’t get outside‚ and they came and broke the lock and tried to put the fire out‚” he added.

Daimo remains in a serious but stable condition in Durban’s Addington Hospital. He sustained burns to his arms and legs after being overwhelmed by smoke.

“It is alleged [Friday] just after midnight‚ at Newlands West‚ a tuck shop container was set alight by unknown suspects. The community members managed to put the fire out. Investigations are continuing‚” she said.

A Somalian national helping his fellow countrymen pack up a shop in Diepkloof‚ Soweto‚ said on Thursday they were targeted by looters after the ...
News
3 years ago

The Khulula district of Newlands West‚ which borders KwaMashu‚ has been a flashpoint of anti-foreigner sentiment in recent months.

In May‚ a letter was sent to foreign shopkeepers in KwaMashu‚ Inanda and Ntuzuma warning them to shut down their businesses within 14 days.

KwaZulu-Natal Premier Willies Mchunu attempted to quash tensions between a local business forum and the foreign shopkeepers‚ with his brinkmanship resulting in a tenuous truce.

With this arson attack‚ which followed a similar spate of attacks in Inanda and KwaMashu two weeks ago‚ it would seem the truce has disintegrated.

“When they warned all the foreign-owned businesses to close‚ they warned us too. I don’t know who it was that did this‚ but I have an idea‚” Chongso said.

“This is my business and everything that I have is inside that container. It has only been open for three months and I can’t just leave it. If I leave it‚ all that will happen to me is I will starve. I know that at any moment they can come back and do this again‚” he added.

Editor’s Note: In an earlier version of this story‚ TimesLIVE reported that Diamo was Somalian‚ based on comments from neighbours. He is‚ in fact‚ Ethiopian‚ according to his employer. The error is regretted.

The death toll following looting of foreign-owned shops in Soweto has risen to three‚ said Gauteng police.
News
3 years ago

Sophie Mashile, a landlord who rents her property to foreign nationals who run a spaza shop, said that it hurts that her tenants were packing their ...
News
3 years ago