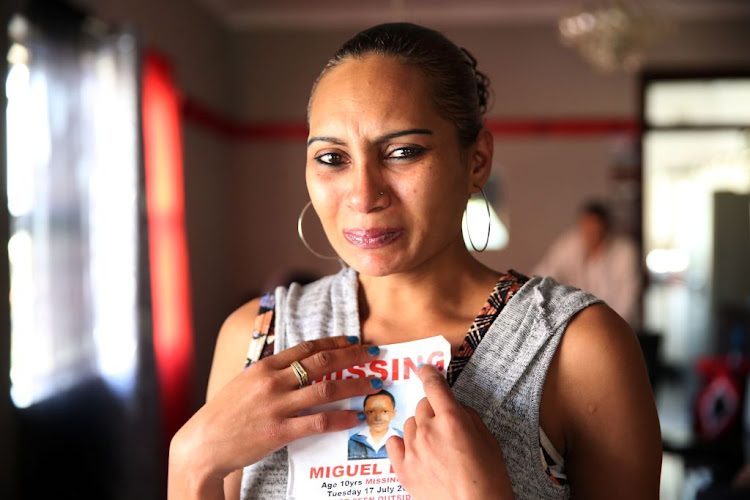 When the body of a child – believed to be 9-year-old Miguel Louw – was discovered in a thicket in Phoenix‚ north of Durban‚ on Monday‚ he had a jacket bunched around his face.

Sources close to the investigation‚ who spoke to TimesLIVE on condition of anonymity‚ said that the sleeves of the jacket had been tied around the child’s head.

While the face was obscured‚ the ubiquitous grey slacks and white school shirt hung on the child’s frame. It is believed that the school uniform led to police linking the body to the Miguel case as this was what he had been wearing when he went missing.

KwaZulu-Natal police spokeswoman Colonel Thembeka Mbele confirmed that the examination of the body would take place at the Phoenix mortuary on Wednesday.

“DNA tests will be conducted to ascertain the identity of the body‚” she said.

Moreover‚ pathologists will examine the remains of the boy to try to understand the manner in which the child was killed.

Most pupils at Rippon Primary School were not aware that a body found in Phoenix‚ north of Durban‚ on Monday may be that of missing Sydenham ...
News
3 years ago

Miguel had been missing for forty nine days when police officers stumbled across the shallow grave‚ but with the slow pace of DNA testing his family will likely not know peace for months to come.

The body will lie in a state mortuary far from his home until DNA tests unravel the mystery. Until then there will be no funeral and no hymns – just the sterile steel tables of the Phoenix state mortuary.

The body‚ found as police pursued fleeing robbers in Longbury on Monday‚ was so badly decomposed that DNA testing is the only way to determine conclusively that the boy in the bush is Miguel.

Comparing unique genetic markers which form the foundation of all the cells in the body is done by a central police laboratory‚ and even though the case will likely be fast tracked‚ the samples will fall in line behind hundreds of others.

And during the wait‚ Miguel’s family will grapple with the reality that he may have seen out his last moments walking to his grave along a path etched into thick bush.

A body that is believed to be of missing nine-year-old Miguel Louw was found on Monday, September 3 2018. This is what we know so far about the case.

The body was found near the home of butcher Mohammed Ebrahim‚ who was linked to the boy’s disappearance on July 17. Ebrahim‚ who lived in a Wendy house on his father’s property‚ was arrested three days after Miguel was last seen.

In his bid for bail‚ which was ultimately successful‚ prosecutor Calvin Govender painted him as a drifter‚ who had been banished to the shed after a family fall-out in 2016.

It was in this shed that he slept on a foam mattress‚ and plied his trade as a butcher at whatever place that would take him.

His entered Miguel’s life as an acquaintance of his mother Raylene‚ with the two working at the same butchery.

He had‚ the court heard‚ lived with Louw and his mother for two weeks before the two had an altercation.

When he was detained‚ he was found in possession of Miguel’s original birth certificate and Miguel’s mother’s identity document.

CCTV footage showed Miguel at a KFC with Ebrahim on the day of his disappearance.

Miguel Louw and my butcher son: Suspect’s dad speaks as child’s body found near his home

The vanishing of 9-year-old Miguel Louw has haunted the dreams of Sheik Ebrahim Shah‚ the man whose son is the police’s prime suspect in the ...
News
3 years ago

Post-mortem for decomposed body believed to be missing Miguel Louw

The decomposed body of a child – believed to be that of missing schoolboy Miguel Louw – will be examined by state pathologists on Wednesday.
News
3 years ago

KwaZulu-Natal Community Safety MEC Mxolisi Kaunda has called for calm in Phoenix after the discovery of a body thought to be that of missing Sydenham ...
News
3 years ago