Chopper crew tries to save firefighters trapped on Johannesburg rooftop 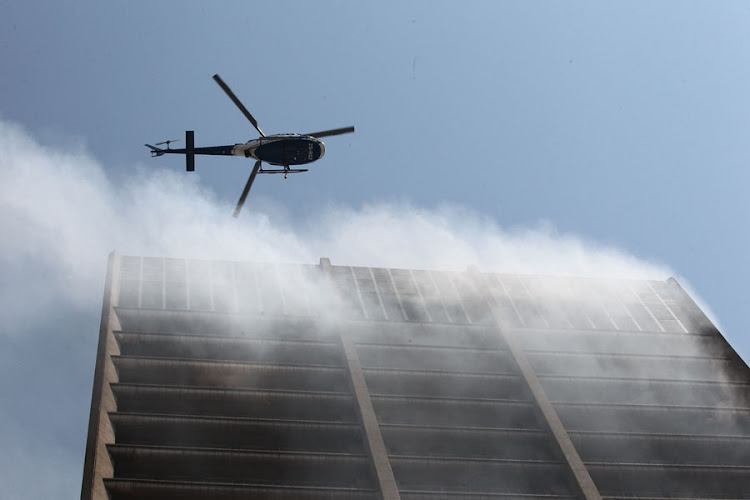 The building that houses the Gauteng Department of Health in Johannesburg CBD is on flames as the paramedics and fire fighters try to extinguish fire.
Image: Thapelo Morebudi

Two firefighters and an unknown number of other people are trapped on the rooftop of the Gauteng health and housing departments' building in the Johannesburg CBD that caught fire on Wednesday morning‚ said Michael Sun‚ MMC for public safety. One firefighter died after falling from the building.

"We understand that they are trapped between the 22nd and 23rd floor and our priority right now is to rescue them and everybody who is trapped‚" Sun said. He said there were initially six people trapped‚ but four others had been found as well.

According to Sun‚ a police helicopter is on the scene to lift those people off the building. "More than 30 minutes ago a rescue team was also sent to the building‚ but no progress has been made in rescuing the people and firefighters inside."

.@CityofJoburgZA's MMC for Safety @MichaelSun168 briefing media on Provincial Govt building which has caught fire in CBD. One fire fighter has sadly passed away. Operations are under way to rescue three others. #joburgfire @radebe_nana @HermanMashaba pic.twitter.com/YLvLLgXMcj

Emergency Services spokesperson Nana Radebe also raised concern about people trapped inside the building. Although JMPD Safety‚ the City of Joburg EMS personnel and ER24 paramedics are on the scene‚ one firefighter has been declared dead.

Radebe said she could not yet reveal the identity of the deceased. "We unfortunately cannot reveal the details because we have not spoken to the family‚" she told TimesLIVE.

Radebe said the cause of the fire is unknown at this stage. A preliminary investigation is under way.

We can confirm one fatality at present

🚧You are requested to avoid the area🚧 pic.twitter.com/tD1V6u1iBa

We're on scene of another structural fire in the Joburg CBD on Sauer street. More details to follow. Images by @Zwane_2Li2Ls pic.twitter.com/kvAarPiSCE