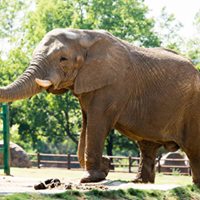 The cause of Kinkel's death is still unknown.
Image: Facebook/@JohannesburgZoo

Kinkel‚ a "boisterous and social" male elephant‚ has died at the Johannesburg Zoo. He was 35 years old.

Zoo management said the cause of death is still unknown.

He fell ill on Monday.

"The staff worked until late Monday night and he was supervised throughout the night by his keeper‚ Alice‚ but yesterday morning he sadly lost his battle. #GoodbyeKinkel‚" the zoo said in a statement on Wednesday.

Kinkel was born in the wild but damaged his trunk in a poacher's snare‚ before he was taken to the zoo.

The National Council of SPCAs (NSPCA)‚ however‚ expressed its concern about any elephants being kept in captivity.

“We are perplexed that there are still elephants being kept in zoos. Surely‚ as a country that has beautiful national parks where elephants and other wild animals get to live their lives out naturally‚ we would have moved away from keeping elephants in captivity‚” said national inspector Martie Rossouw‚ manager of the organisation's wildlife protection unit.

She added: “We can only hope that there will be victory for all elephants in zoos as a result of this tragedy; that morality will prevail and that elephants will be phased out of zoos and captive facilities in South Africa.”

A team of UK-based scientists is collecting rhinoceros droppings for a new conservation initiative to help prevent global extinction of the ...
News
2 years ago

As a poacher, he killed 50 elephants. Now he's a hero ranger

What does a wildlife poacher’s eureka moment look like?
News
2 years ago
Next Article