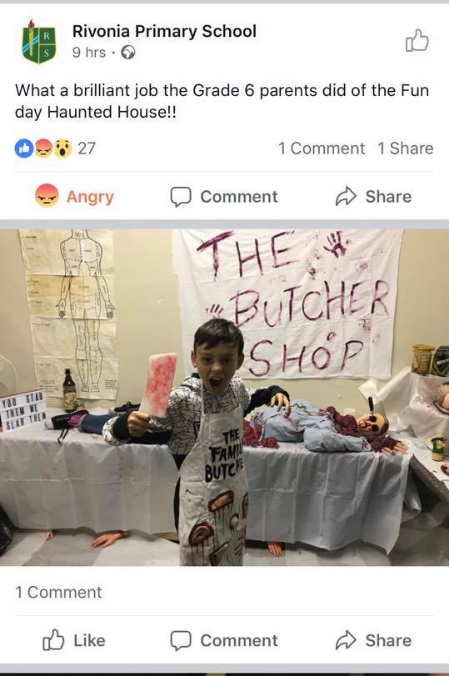 The governing body of a Johannesburg primary school is "completely surprised" that a haunted house - complete with props of mutilated corpses and bloodied knives - has creeped out users on social media.

Rivonia Primary School on Tuesday confirmed to TimesLIVE that it had to remove photographs of the Haunted House - which was part of its Fun Day on August 25 - from its official Facebook page due to the "unjustified response by one individual".

"We were completely surprised and really disappointed that what was such a joyous and successful event for Rivonia Primary School was turned upside down by Facebook comments by an individual who was not‚ as far as we are aware‚ at the Fun Day and hence had no context for the Haunted House."

"Furthermore‚ it has come to our attention that the individual has now deleted all the posts in this regard from her Facebook page apparently distancing herself from her comments‚" it said.

While the school governing body appears to be aware of just one complaint‚ screen grabs of the photographs have caused an uproar in the Total Shutdown group on Facebook‚ where women questioned the aim of the Haunted House and criticised the school for "promoting violence in an already violent country."

"Oh wow. I'm speechless. My friend was hacked to death in her bathtub by her husband‚ with their two kids in the house. Imagine normalising the way their mother was murdered!" one woman commented.

Most who commented on the post in the group‚ which is an online movement against gender-based violence‚ demanded to know the relevance of the Haunted House in schools.

The governing body told TimesLIVE that the parents of each grade were responsible for one fun activity at the Fun Day. The Grade 6 parents chose the Haunted House.

"The Grade 6 parents were responsible for the Haunted House. There was an age restriction for entrance and pupils were even accompanied by their parents into the exhibit."

"We have received no complaints‚ except from the Grade 7 and other pupils who felt it was “boring” as it was too light."

University of KwaZulu-Natal students have called for more male inclusion in the fight against gender-based violence.
News
3 years ago

Women across South Africa were united on Wednesday as they took part in #TotalShutdown marches.
News
3 years ago