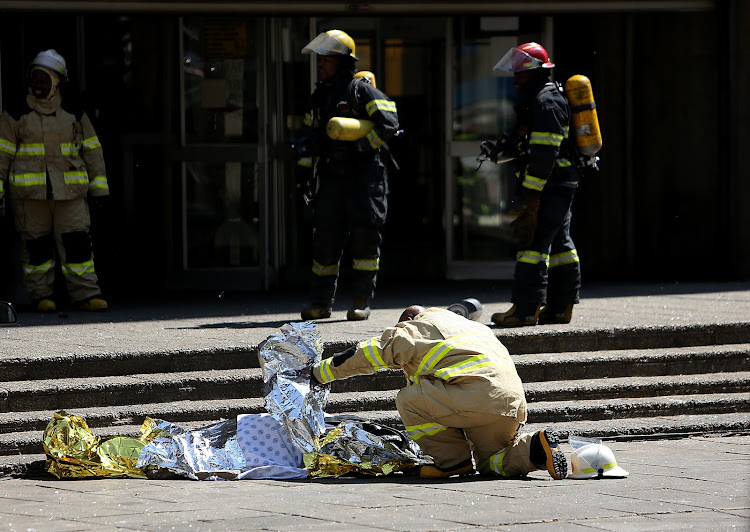 One of the firefighters fell to their death‚ and two others were found inside the building‚ which houses the offices of the Gauteng Health and Human Settlements on Sauer Street on September 5 2018
Image: ALON SKUY

Officials have confirmed that three firefighters have died in a blaze that engulfed the top of a Johannesburg CBD building on Wednesday.

One of the firefighters fell to their death‚ and two others were found inside the building‚ which houses the offices of the Gauteng Health and Human Settlements on Sauer Street.

But there are further fears that firefighters and civilians trapped on a ledge on the 23rd floor of the building will continue to battle soaring temperatures and strong winds as they desperately try to stop themselves from slipping off a ledge just 60cm wide.

Several firemen responded to a fire in a building in downtown Johannesburg earlier on Wednesday.

The building houses the Gauteng Health and Housing Departments as well as offices of Cooperative Governance and Traditional Affairs.

Firefighters are trying to contain a blaze that broke out hours ago at a printing factory in Kya Sands in Johannesburg.
News
2 years ago

TimesLIVE has learnt there are firefighters and civilians on the ledge‚ while a number of civilians are stuck on the roof of the building.

Earlier‚ police tried to use a helicopter to reach those trapped but have so far failed.

Wynand Engelbrecht – a former Midrand Fire Station commander who now runs Fire Ops SA – told TimesLIVE that the situation facing those who were stuck would becoming even more dire as the afternoon progressed.

"Those up draught winds will fan the fire again‚ as we are seeing. Coupled with the up-draughts‚ the hot air escaping the building from the broken windows‚ will be turning those ledges into a raging inferno. It will be noisy‚ smoky‚ hot‚ with the air filled with chocking and poisonous fumes.

A Johannesburg firefighter fell to his death after a blaze engulfed the top of a building housing the offices of the Gauteng Health and Human ...
News
2 years ago

Those people will be in a desperate situation. They will want to move but they can't. Any movement will spell certain death. Coupled with these dangers will be the dangers from any windows which explode from the heat.

"It’s a complete disaster‚” he said.

Engelbrecht said from his 40 years of work as a firefighter he knew the building well.

"That building is a complete fire stack and hazard. It’s a maze of passages and the ledge that they are on is no bigger than 60cm. It’s barely wide enough for a person's foot."

He said the winds on the outside would be rapidly building.

"They will be strong enough to easily blow someone off. They will be gaining in strength and by now close to approximately 20km/h. Another problem is that the firemen who are stuck on the ledge will not be able to do anything to keep the civilians from falling. They will be exhausted and barely hanging on for their own lives."

He said rescue operations would be limited.

"Helicopters are too dangerous‚ especially if you look at the force of the down draught from the rotor blades‚ which will blow those on the ledge off. The height that the people are stuck at means that there is no ladder long enough to reach them. The longest fire ladders which we have in South Africa are 60m and there are only two of these ladders in the country‚ and they are in Cape Town and Bloemfontein.

Chopper crew tries to save firefighters trapped on Johannesburg rooftop

Two firefighters and an unknown number of other people are trapped on the rooftop of the Gauteng health and housing departments' building in the ...
News
2 years ago

"The only way to rescue them will be to rappel from the roof of the building but that presents its own dangers. The rescuers will have to be incredibly careful not to mishandle those they are helping. Any slight mis-movement - caused by those on the ledge panicking - could see them slip and fall.

"It is going to be touch and go and time is not on their side."