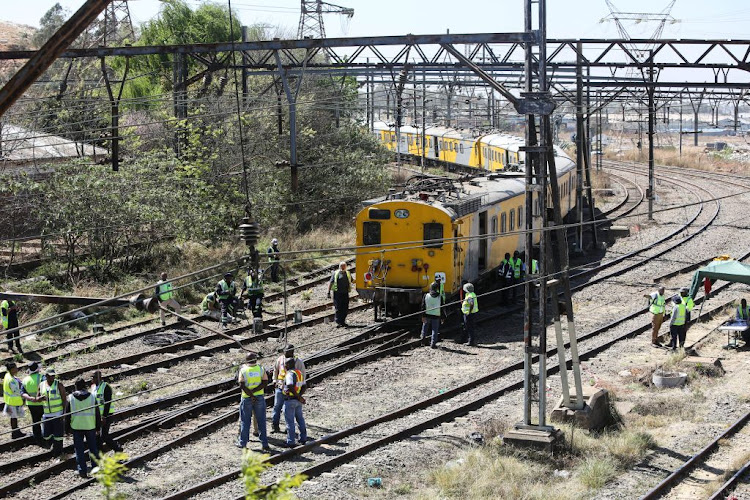 Metrorail workers are pictured on the scene where two trains collided on September 4, 2018, near the Booysens train station in Johannesburg. Over 100 commuters were injured in the incident.
Image: Alaister Russell/The Sunday Times

An official who signalled two trains on to the same track failed to check the line was clear‚ instead operating on an assumption which led to a costly crash.

This is the preliminary finding of the Railway Safety Regulator (RSR) into the collision between two Metrorail trains on Tuesday at the Booysens Station in Johannesburg. One train was en route from Faraday to Naledi Station‚ while the other was travelling from Booysens Station to George Goch Station.

The regulator found that on the day‚ a Train Control Officer (TCO) issued manual authorisation to the train headed to Naledi at 6.54am to pass and proceed to Crown Station. After a couple of minutes‚ the official authorised another train on to the same line.

The relief of learning no one died was like a balm to Thembisa Lukwe‚ who rushed to offer her help after two trains collided head-on near Booysens ...
News
3 years ago

About 100 injured as two passenger trains collide in Joburg

Two passenger trains collided at the Eloff extension in Selby‚ south of Johannesburg‚ injuring about 100 people early on Tuesday.
News
3 years ago

The official gave the second authorisation without having first checked whether the line was clear.

“When interviewed‚ the TCO indicated that he based the authorisation on the assumption that the section would have been cleared by then. This led to the collision of the two trains at the diamond crossing‚ outside the Booysens Station.“Substance abuse tests were conducted on both crews prior to the incident and post the incident‚ and the results were negative‚” said the RSR.

The regulator reprimanded Prasa for the fact that there was no supervision of train control officials at the signal cabin at the time of the accident.

“The regulator has‚ in the past‚ instructed Prasa to provide sufficient supervision to TCOs and to provide proper control and approval of manual authorisation‚” said the RSR.

“Accidents like these suggest that Prasa is in contravention of its own standard operating procedures‚ as well as the instruction of the regulator. The RSR‚ therefore‚ calls on Prasa to expedite the process of appointing Section Managers to enforce countersigning at CTCs as a matter of urgency‚ in line with the special conditions of their permit‚” is said.

Over 100 commuters sustained injuries ranging from minor to serious on Tuesday September 4 2018 after two trains collided while travelling on the same track.