Twitter fired up over 'Nazi Mandela' flag at art show 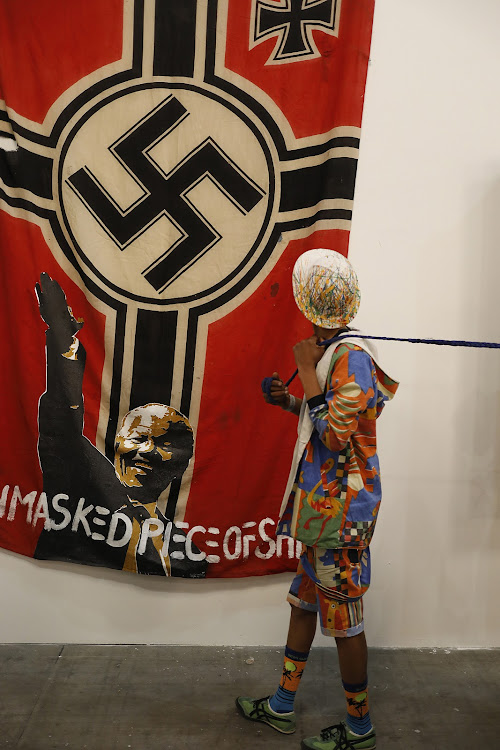 The Nelson Mandela Foundation on Monday slammed the artwork of controversial artist Ayanda Mabulu, which shows Madiba superimposed on a Nazi flag, as deeply "offensive and unreal."

Underneath the picture of Mandela, which shows him doing the Nazi salute, are the words "unmasked piece of shit." The artwork was on display at the FNB Joburg Art Fair but was apparently taken down twice in one day. It's believed Mabulu caught organisers off-guard as he was not set to showcase any of his work.

The foundation said it was looking into its options on possible action as "there are limits" that should be respected.

This is not the first time the artist has stirred controversy around some of his art. In 2016 an artwork of former President Jacob Zuma with Atul Gupta created a stir as it showed the then president in a sexual position with the Gupta brother.

Say what you about Mandela but he was never a mass murderer like Hitler he was never a Nazi this is not freedom of speech it's blatant direspect https://t.co/qw0OgFK75t

When some of us found the Zuma painting distasteful, it was called freedom of expression. Karma is back. Deal with it👉🏿 Mandela Foundation ‘offended’ by Ayanda Mabulu's Nazi artwork https://t.co/N3rtM4eCeS via @ewnreporter

I find the artwork offensive as Mandela loved all people. Regardless of colour or religion. He never killed or hated. People want to tarnish him as he had a good heart and was an honest man. He knew reality and he knew fiction. The new anc was fiction. https://t.co/m7LpB1KGZo

So, when a so-called "artist" uses nazi imagery to tarnish the legacy of Mandela, people's commentary is - at best - subdued.

The guy is an attention seeker and he always gets it by being controversial. Depicting Mandela as a NAZI will surely get the attention of the ANC and many people. He knows how to trigger emotions 😆😆 https://t.co/uM5t1V5JOq

Nazi is extreme. Mandela didn’t create or participate in a holocaust https://t.co/t96QyXVaxf