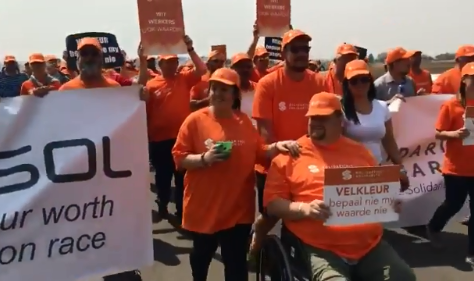 A screen grab of a video footage where Sasol workers in Secunda, Mpumalanga affiliated to Solidarity demonstrating their disapproval of a share scheme offered exclusively to black staff at petrochemicals firm Sasol
Image: Via Twitter/@antonnies

In a letter to the two CEOs of Sasol‚ Bongani Nqwababa and Stephen Cornell‚ Solidarity accused the company’s management of ignoring white workers in a staff benefit share scheme.

The union declared a dispute against Sasol at the beginning of the year‚ objecting to the exclusion of white employees from Sasol Khanyisa Phase 2‚ which was launched in June this year.

The dispute led to the union embarking on a strike‚ which began last week.

In its explanatory note on the share scheme‚ Sasol said employee participants in the Sasol Khanyisa Phase 1 were all permanent Sasol employees‚ regardless of race‚ tenure or seniority‚ who were participants of the previous Sasol Inzalo scheme and who were still actively employed on June 1‚ 2018.

Mostly white workers took to the streets of Secunda in Mpumalanga on Thursday to demonstrate their disapproval of a share scheme offered exclusively ...
News
3 years ago

But Phase 2 of Sasol Khanyisa was extended to its black permanent employees (African‚ Indian‚ Coloured)‚ as defined by the Department of Trade and Industry Codes of Good Practice.

Sasol said the intention of the share scheme was to create meaningful financial benefits for approximately 230‚000 black public shareholders and qualifying employees‚ and to achieve 25% direct and indirect black ownership of Sasol South Africa Limited.

In the letter to Nqwababa and Cornell‚ published on Monday‚ Solidarity CEO Dirk Hermann said that for Sasol to follow a simplistic race approach that excluded white workers in a scheme aimed at addressing the imbalances of the past was a lazy approach.

“To calculate the worth of white workers in blue overalls according to their race and to present that as a normal intervention to restore imbalances is immoral.”

Hermann said last Thursday that it had emerged that Sasol had awarded share options worth R106-million to its top executive team.

“You are both beneficiaries and you will each receive share options of more than R20-million. Mr Cornell‚ you and the other white executives are included even though you are white‚” Hermann said.

Responding to the letter‚ Sasol’s Matebello Motloung said that the incentives were to reward executives for achievement of Sasol’s strategic objectives which would maximise shareholder value. As such‚ Nqwababa and Cornell “are remunerated in line with the company’s remuneration policy”.