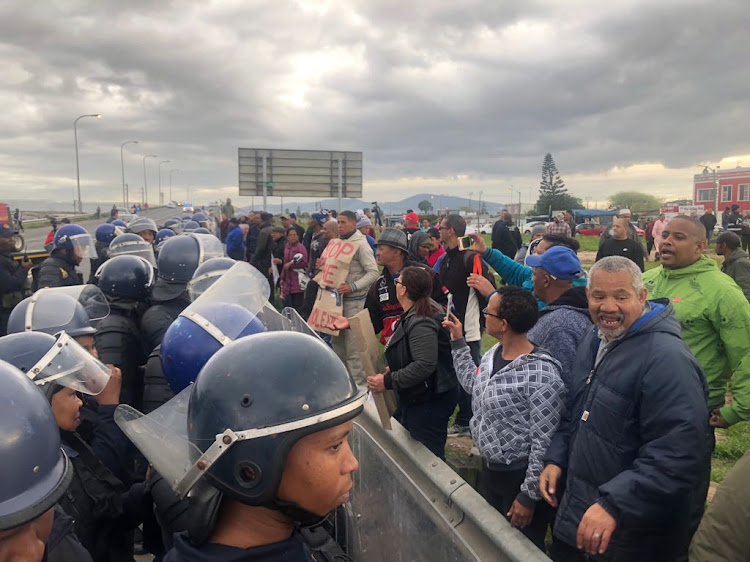 The Cape Flats community of Bishop Lavis blockaded all roads into the suburb on Wednesday in a protest against gang violence.

Residents set up their blockades at 5am‚ hoping to hand a memorandum to the police and ward councillor Asa Abrahams.

“We commit ourselves to a peaceful demonstration‚” said Victor Altensteadt‚ president of the Bishop Lavis Action Committee.

Crime statistics released on Tuesday showed the Western Cape had 808 gang-related murders in the year to March 31‚ accounting for 83% of such crimes nationally.

The community of Bishop Lavis in Cape Town blockaded all roads into the suburb on September 12 2018 in protest against gang violence.

The crimes — most of them driven by gangsterism — are concentrated in Cape Flats suburbs such as Bishop Lavis‚ Elsies River‚ Kensington and Bonteheuwel‚ where there have been anti-gang protests in recent weeks.

Several Cape Flats communities are gearing up for a “mass shutdown” on Wednesday October 3‚ calling for an end to crime and gang violence‚ followed by a march to parliament.

“I believe gang fights can be stopped. This takes skills development‚ employment and reconstruction of the area. Without those three things‚ you will always have gangs here‚” said Ronald Snipper‚ a gang mediator and member of the Manenberg Safety Forum.

Activist Roegshanda Pascoe said people were tired of being “held hostage” by gangs and said the October 3 shutdown would bring a united voice to the campaign.

“We can't work in isolation any more. We can't hide behind the fact that police don't have a plan. It's also unfair for people to expect the police to tackle social issues. We can't blame the police for everything‚” she said.

‘Mass shutdown’ planned on the Cape Flats in October

Several communities on the Cape Flats are gearing up for “a mass shutdown” on October 3‚ calling for an end to crime and gang violence.
News
3 years ago

“Whether or not they make thousands of arrests‚ it certainly is not making an impact in getting the guns and shooters off the streets‚” he said.

"Our people are living in fear. We need to make the president aware that our people are dying on the streets. We also need to keep the provincial police commissioner accountable for the policing failures within communities.”

John Cloete from the United Public Safety Front said: "There is a groundswell and more people are coming out of their comfort zones and speaking out against the state's inability to protect us. We must bring the economy to a standstill.”

Cosatu in the Western Cape said on Tuesday it would file a section 77 notice after being approached by Cape Flats communities about gang violence.

This means Cosatu and its affiliates will be able to hold talks on gang violence with the provincial and national governments through the National Economic Development and Labour Council. If the talks fail‚ the labour federation plans to hold a general strike‚ which will bring almost all economic activity in the Western Cape to a halt.

Cosatu provincial secretary Malvern de Bruyn told the Mail & Guardian: “We have a whole list of communities that approached us for assistance from Manenberg to Strand. We share the same plight as these communities because it’s our members being killed.”