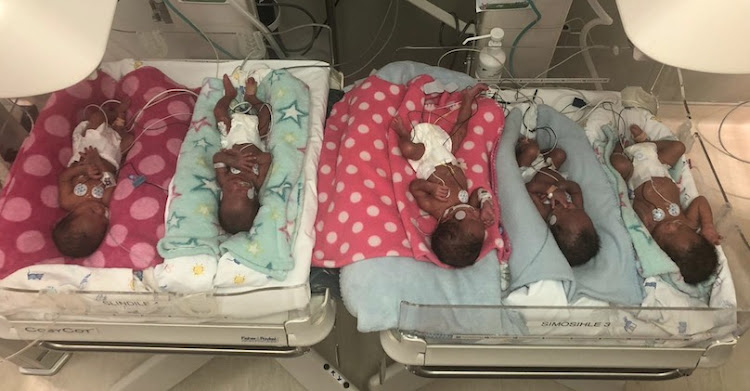 To the power of 5: introducing the Buthelezi babies.
Image: Supplied/Clinix group

Joe Buthelezi‚ the father of the quintuplets born at the Clinix Botshelong–Empilweni in Vosloorus‚ almost collapsed when his fourth and fifth babies were born.

He and his partner‚ Noluthando‚ had only been expecting three babies.

Speaking to TimesLIVE on Thursday morning‚ Dr Moeng Pitsoe chuckled as he recalled how Joe had to be assisted to his seat when he realised that he was now a father to five newborns.

"Three is a lot but they had prepared for that. So when number four and five came‚ he almost collapsed‚" Pitsoe said.

"The mother was calm. She was aware of the commotion around her but she was calm."

So how long did it take to deliver the quints?

"C-sections are quick. From delivering the first baby to the last‚ it took five minutes‚" Pitsoe said‚ adding that it would have been even quicker‚ but the nurses had to prepare for the other two surprise arrivals.

Just like the new parents‚ Pitsoe said the fourth and fifth babies came as a surprise to him too.

Meet the Buthelezi quintuplets from Vosloorus: 'They're all breathing on their own and gaining weight'

The babies will remains in hospital until the each weigh 2kg.
News
2 years ago

While Joe already has twins from a previous marriage‚ Noluthando only had one child. However‚ she became concerned when after quite a long time of trying to conceive‚ she failed to fall pregnant again.

"She was taking ovulation induction drugs to assist in releasing more eggs when ovulating. She just wanted one more baby but she ended up with five‚" Pitsoe said.

Pitsoe said they knew 10 days after she took the drugs that she was pregnant. Weeks later‚ they found out they were expecting four babies but as the scans progressed‚ they could only see three babies. Her pregnancy was carefully monitored to ensure that all the babies were born alive.

Speaking on the drug intake‚ Pitsoe said it was nothing new. It was common for the drugs to help women fall pregnant but multiple pregnancies were not as common from these drugs.

"Multiples are a side-effect but not always a desired effect‚" Pitsoe said. When using these drugs‚ the chance of having multiple pregnancies was 0.0092%‚ Pitsoe said‚ adding that it was "very‚ very rare." He said in this case‚ it was a mixture of drugs and the mother's genetics.

After checking that all the babies had been delivered‚ Pitsoe said he jokingly asked whether Noluthando did not want to have her tubes tied.

"She didn't want that‚" said Pitsoe.

The babies‚ who were delivered at 30 weeks on September 6‚ have been named Siyanda‚ Sibahle‚ Simesihle‚ Silindile and Sindisiwe. Each of the babies weighed more than a kilogram at birth. They are expected to be released from hospital once they each weigh 2kg.

South Africa welcome its fifth set of quintuplets, now known as the Buthelezi quintuplets, since 1960. Here is their miracle story.