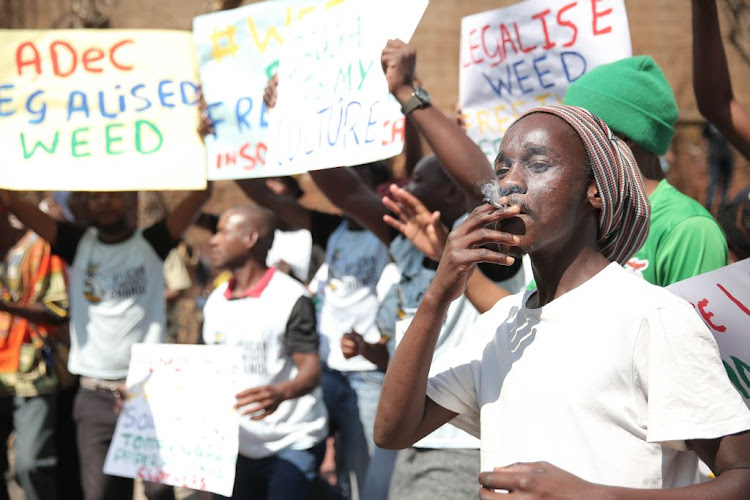 Marijuana lobbyists celebrate outside the Constitutional Court in Johannesburg, on September 18 2018, after the court ruled that the personal use of marijuana is not a criminal offence.
Image: Alaister Russell/The Sunday Times

Being able to grow and smoke dagga at home is raising all sorts of questions‚ such as how to determine how intoxicated a smoker is behind the wheel.

Tuesday’s ruling by the Constitutional Court is raising concerns around regulation and control that need to be addressed to ensure the safety of users and non-users – especially when it comes to road safety.

Laws and limits exist for driving under the influence of alcohol but‚ as tetrahydrocannabinol (THC) - the principal psychoactive constituent of marijuana – remains in a user’s system for much longer than alcohol does‚ it makes it difficult to establish limits and laws around marijuana use.

Rhys Evans‚ director at ALCO-Safe‚ which supplies drug and alcohol testing equipment‚ said in a statement on Tuesday that regulations‚ limits and testing requirements would be needed.

Section 65 of the National Road Traffic Act states that‚ “No person may drive a vehicle or occupy the driver’s seat of a motor vehicle of which the engine is running on a public road while under the influence of intoxicating liquor or drug having narcotic effect”.

“In theory‚ any person caught with even traces of marijuana in their system whilst driving can currently be arrested and/or prosecuted. But because it can remain in a person’s bloodstream for hours to days after use‚ a person who tests positive for marijuana isn’t necessarily intoxicated. At present‚ no limit has been established to determine how much THC needs to be present in the bloodstream for a person to be considered intoxicated‚" said Evans.

He said the likelihood of a driver being tested for drugs in a roadblock were minimal due to a lack of testing equipment available to officers.

"As a result‚ drivers that indulge in substances such as marijuana are less concerned with being caught in a roadblock than if they have consumed alcohol‚" Evans added.

THC can be detected in blood tests‚ urine tests and saliva tests – the latter producing results within three to five minutes.

“It is likely that legalisation of marijuana will only increase the number of active users driving a vehicle while under the influence. Until regulations are in place‚ however‚ it will be extremely difficult, if not impossible, to prove actual intoxication and there will be little to stop these drivers from taking to our roads‚” said Evans.

Dagga ruling - how it all started

“Garreth Prince defeated Babylon‚” screamed a man repeatedly in the Constitutional Court after it ruled that the ban on private use and cultivation ...
News
3 years ago

The ConCourt ruling on cannabis in five interesting tokes

The Constitutional Court has ruled that the private cultivation, possession and consumption of cannabis is legal. Here are the key elements of the ...
News
3 years ago

IN FULL: This is how the ConCourt decided you can smoke dagga at home

The Constitutional Court handed down judgment in the application for the confirmation of an order of constitutional invalidity made by the High Court ...
News
3 years ago