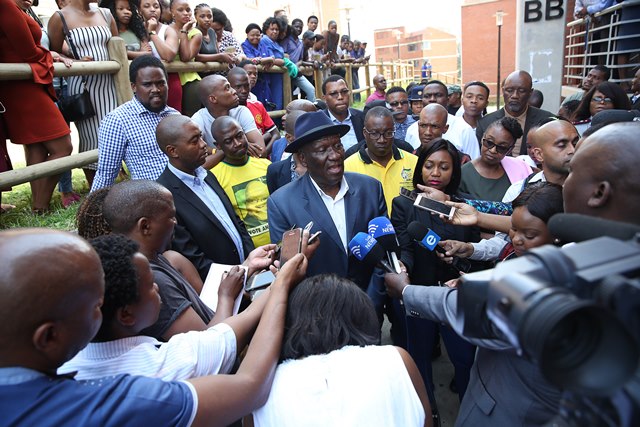 Minister of Police Bheki Cele addressing the media on the incident that happened at the University Of Zululand on September 18 2018
Image: Thuli Dlamini

Dried blood splattered on a wall and bloodied footprints in a small University of Zululand room painted a grim picture of first-year student Sazi Ngubo's last moments on Sunday.

Police minister Bheki Cele inspected the small dishevelled room Ngubo had been sharing with his alleged killer since January‚ standing next to the blood-soaked bed he once slept on.

Moments after the fatal stabbing‚ fellow students turned on his alleged killer‚ dragging him out of the room before stoning and beating him. Security guards finally saved the man from certain death. 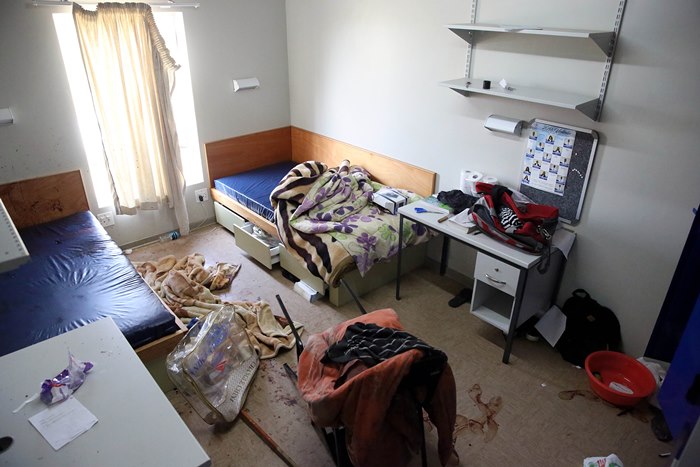 Speaking after he visited the blood-stained room at the university's KwaDlangezwa campus on Tuesday‚ Cele said: “That person died alone and abandoned‚ that scene was a horrible scene to see."

Cele also had strong words for students who take the law into their own hands. A video of the student who is alleged to have stabbed Ngubo being viciously attacked by other students went viral. “Those who practice vigilantism‚ including on this campus‚ the law will have to take its course on them”.

Police minister Bheki Cele visited the University of Zululand on September 18 2018, after a violent incident involving two roommates, during which one was fatally stabbed. Subscribe to TimesLIVE here: https://www.youtube.com/user/TimesLive

During the engagement with the minister‚ disgruntled students raised concerns about safety issues inside residents and on campus.

“I am seriously concerned about the safety of students. If‚ Minster Cele‚ you were to travel at night to [the] main gate‚ the lights are not working‚ at res my room doesn’t have a window but I am told I am safe at res‚” said one student‚ Sanele Masuku‚ to great applause from other students present.

Following the incident‚ students said that they felt unsafe on campus. 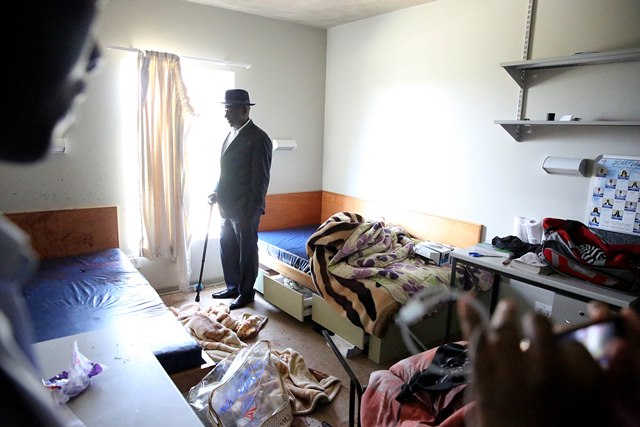 Minister of Police Bheki Cele inspecting the room where the student was stabbed to death by another student in University Of Zululand on September 18 2018
Image: Thuli Dlamini

"The university has done nothing to make us feel safe after the incident. When I am travelling from one res to another I don't feel safe. I feel as though someone will come and stab me and no one will see me because no one (security) is visible on campus‚” said Syabonga Ndwandwe.

Cele also said that he would be engaging with the minister of higher education‚ Naledi Pandor‚ about violence within universities following a similar recent stabbing incident that took place at the University of KwaZulu-Natal. 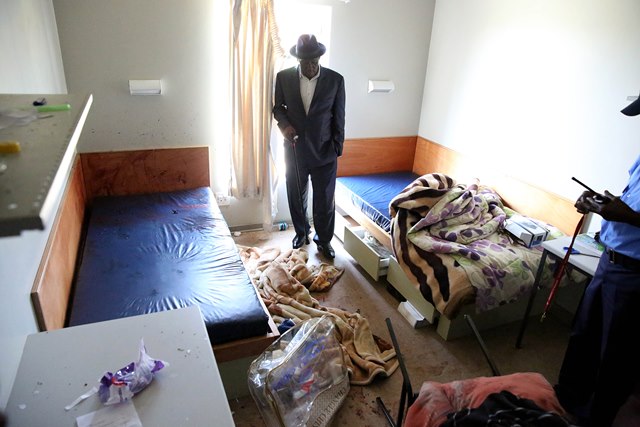 Minister of Police Bheki Cele inspecting the room where the student was stabbed to death by another student in University Of Zululand on September 18 2018
Image: Thuli Dlamini

Colonel Thembeka Mbele said the alleged attacker in this incident was currently in hospital.

"That matter was in court today and a doctor's note was presented."

She said a remand date had not been finalised.

The Student Representative Council (SRC) of the University of Zululand has reacted with shock to a fatal stabbing incident between roommates that led ...
News
3 years ago

A police Crime Intelligence Unit operative was stabbed to death inside a tavern in KwaNdengezi‚ west of Durban‚ at the weekend.
News
3 years ago